Cycling jerseys signed by Bradley Wiggins, Mark Cavendish and Sir Chris Hoy are being offered as an incentive to enter a new Cyclo-Sportive being organised next month. 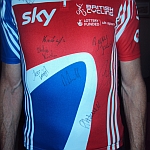 The Marlow “Red Kite Ride” on Sunday September 2nd offers riders the choice of 100 mile or 50 mile routes through Buckinghamshire, Oxfordshire and Berkshire with the longer route passing through the Vale of Aylesbury over some of the highest parts of the Chilterns and into the Thames Valley.

Each entrant will be entered into a draw to win one of two Cycling jerseys – one a Sky sponsored GB jersey signed by many of the Olympic track team including Sir Chris Hoy, Philip Hindes and Jess Varnish and another signed by members of the Sky Pro Cycling team.

In addition all Cyclists can enter a raffle on the day of the event for autographed replica jerseys signed by Mark Cavendish and Bradley Wiggins.

The first is a replica World Championship rainbow jersey signed by Mark Cavendish, the current World Road Race Champion. And finally, we have to offer a very special replica British National Road Race jersey signed by Bradley Wiggins. Both jerseys are junior size. 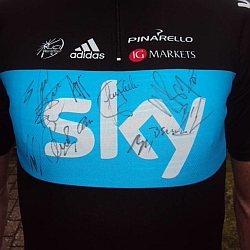 The Marlow Red Kite Ride will start and finish at the Marlow Sports Club on the banks of the River Thames in an area which is a popular tourist attraction.

Organisers, the Marlow Riders Cycling Club, are keen to encourage both experienced Sportive riders and relative newcomers to the sport due to the British success in the Olympics.

Entry is £25 and all net proceeds will go to the charities: Marlow Sports Club and Hearing Dogs for the Deaf.

For more details and entry: http://marlowredkiteride.co.uk