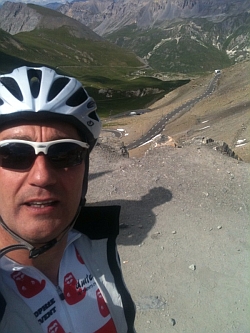 News just in from British Cycling's Recreation and Partnerships Director, Stewart Kellett, who has recently returned from a successful attack on the Marmotte, one of the monuments on the global sportive calendar (not the small furry creature of the same name).

Although in charge of all things leisure and recreation-related at British Cycling, Stewart is actually a closet hardcore mile-eater, who's completed L'Etape du Tour,  LEJOG and now, the Marmotte.

Stewart's secret to sportive success? Well it appears to be eat, eat and eat some more. Here's a list of what powered Stewart over the lofty passes of the Croix de Fer, Telegraphe, Galibier and Alpe d'Huez:

Congratulations to Stewart and all the other British Cycling members who completed this year's gruelling edition!