Milton Keynes based Team Corley Cycles squad is happy to announce its plans for the 2013 season. 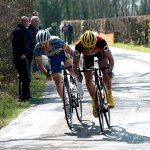 After a successful 2012 road season which included a win at the Wally Gimber, missing out on a podium spot at the Colne Grand Prix by the smallest of margins and dominance in their own co-sponsored Thursday night series, Phil Corley - Team Principal, believes there is more to come from his team in 2013.

"We've had a good season with some great results considering we run on a budget much smaller than some of the UK racing teams. The team itself has been around for over five years and the riders have always been there or thereabouts, especially in long gruelling days where Roy (Chamberlain) could flourish!"

The team sees a smaller set up for next year with six riders in the main squad; however this will not deter them from continuing to be a presence at the best races the country has to offer.

2013 will see a few departures but also a couple of signings for the team. Richard Cartland leaves to pursue a more local based calendar whilst Matt Jones leaves to join UCI Continental Team IG Sigma Sport.

The departure of one Matt sees another Matt arrive. One of the signings for 2013 is Matt Gee, who joins from Metaltek-Scott. Matt Gee is a very capable rider who has won such races as the Newcastle Cheviot CC 4 day.

"I had thought about hanging up my road cycling shoes at the end of this season and started doing a bit more mountain biking, which is where I first got into the sport. But having been speaking to (Team Manager) Sarah throughout the year I'm very happy that they've offered me a place on the team."

The other signing for the main team is Jonathan Shuster. Jonny moves up to the team after joining Club Corley Cycles mid-way through the 2012 season. His road season was marred by a broken collarbone suffered in a crash at the ECCA Championships in May.

"I've only been racing since 2011, so I'm really thankful of this opportunity to prove myself on a team like Team Corley Cycles. Obviously my 2012 season could have gone better but I’ve got an excellent scar at least. I got to know most of the riders early in the year; they and the staff of the team have been very accommodating towards me. I'm relishing the chance to ride for the team next year."

Roy Chamberlain, Ian Knight, Michael Smith and Liam Stones stay with the team through to next year.

Liam had this to say of the support he has received in a year where he gained his Elite licence; “I really appreciate all the team staff do for me, it’s like having an extended family. I’ve had a great year with them and I’m glad to be riding for them again next year.”