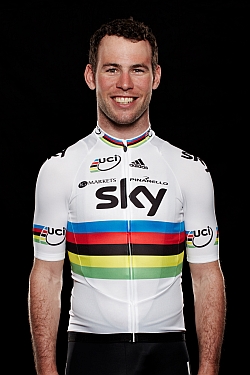 Mark Cavendish sprinted to his fourth victory of the season when landing stage two of Tirreno-Adriatico in thrilling style.

The world champion was led out by Edvald Boasson Hagen at the end of the marathon 230 kilometres stage from San Vincenzo to Indicatore and he then jumped on the wheel of Tyler Farrar (Garmin-Barracuda) before swooping past to take the win.

Óscar Freire (Katusha) finished fast and late for second, with Farrar holding on for third just ahead of Peter Sagan (Liquigas-Cannondale) in fourth.

It followed up triumphs at the Tour of Qatar (twice) and Kuurne-Bruxelles-Kuurne and underlines Cavendish's form ahead of Milan-San Remo next weekend, his first big target of 2012.

Matthew Goss, runner up to Cavendish at the World Championships in Copenhagen, continues to lead the overall standings following his GreenEDGE team's dominant display in the opening time trial.

The stage had earlier seen a two-man break stay clear for much of the day, with Diego Caccia (Farnese Vini) and Stefano Pirazzi (Colnago-CSF) given plenty of leeway before they were caught with 24km remaining on the second of two lumpy 33km circuits around Indicatore.

Heading into the closing stages the peloton was split in two by a crash with 1.6km remaining but most of the big-name sprinters were up front by that point and in a frantic finish it was Cavendish's acceleration which won the day.