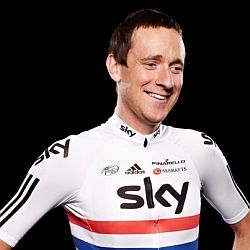 Team Sky's Bradley Wiggins moved into the overall lead at Paris-Nice after making the most of getting into the crucial break on stage two.

The Brit had started the 185.5 kilometres stage from Mantes-la-Jolie to Orleans just a second behind leader Gustav Larsson (Vacansoleil-DCM) after an outstanding display in the rain in the opening time trial 24 hours earlier.

What proved a fascinating second day had been expected to feature a bunch finish given the flat nature of the terrain but strong crosswinds played a key part in splintering the peloton shortly after the halfway point.

Most of the general classification contenders made their way into the front group of 21 riders, but not Larsson and there was soon a gap of over a minute as the field split into echelons.

That made Wiggins the virtual leader out on the road and he helped his cause further by taking the day's intermediate sprint and a bonus three seconds.

When it came to the finish, Tom Boonen (Omega Pharma - Quickstep) outsprinted JJ Rojas (Movistar) and John Degenkolb (Project 1t4i) for the victory but the day's big winner was Wiggins as the front group all came in together and 2:29 ahead of the rest.

It means he now leads the general classification by six seconds from Levi Leipheimer (Omega Pharma - Quickstep), with Boonen a further second back in third.

Wiggins had been given valuable assistance in the front group by team-mate Geraint Thomas, with the pair of them piling on the pace at the front to maximise their advantage.

Thomas briefly looked in with a chance of the stage win when he surged down the outside with 500 metries to go but the Welshman eventually crossed the line in 10th, one spot ahead of Wiggins.

“They were pretty horrible conditions out there; it was cold, there was some sleet and rain around too but most importantly Geraint [Thomas] and myself stayed safe in that front group and managed to take the jersey.

"It’s probably going to be much the same tomorrow – it will be a bit of a free-for-all but it does help having the jersey and we can hopefully control the race a bit more. We’re in a good position to do that and looking forward to the rest of the race.

"I’m in the shape of my life at the moment and that’s thanks to the coaching team behind me who have pushed me hard all winter. They’ve never let up and the goal is the Tour in July which is what we are working towards. But this is a big early-season target, it's a big race in its own right and we're here to win it."

"The way Bradley rode reinforced our belief that he is capable of winning this race.

"The danger on days like this is throwing away the GC if you get caught out and that is what we really wanted to avoid happening.

"This obviously gives a lot of confidence now to the rest of the team to try and defend that jersey all the way to Nice and the Col d’Eze. It gives added purpose and direction to every individual. Obviously the goal was to help Bradley win and now he’s leading so the job is even more obvious."