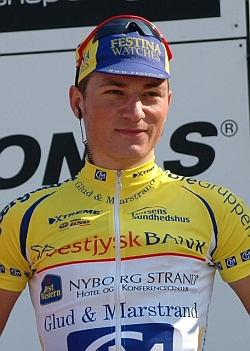 Cycle Premier Racing Team is delighted to announce the signing of 29 year old Michael Berling from Arhus in Denmark for the 2012 UK season.

Berling is best known in the UK as having won one of the few UCI events in this country, the Leicestershire Cicle Classic and finishing 2nd in 2009 and 4th in 2008 but in Denmark he is also the Criterium Champion, Danish Cup Champion (a long running Danish Federation race series made up of 5 major events) and has finished in the top 10 of the National Road Championships on more than one occasion. As well as a truly talented rider on the road Berling also holds national medals on the track in Madision, Points, Omnium and Team Pursuit events.

Not only is Beling keen to return to Cicle Classic in 2012 but he has also cited the British Premier Calendar as a race series he is looking forward to riding as well as sampling the British criterium scene during the summer.

The British Premier Calendar starts this year with a new race that uses off road sections like Cicle Classic as part of the course and Berling is looking forward to riding this with the team before heading north of the border to Tour Doon Hame, in Scotland and then rounding off April with Cicle Classic in the teams home county of Leicestershire.

Berling said, “I was keen to try the British race scene this year and with Kovert Racing bikes being a new sponsor to Cycle Premier this seemed a good time to join them and help promote their products both in the UK and in Scandinavia.”

Cycle Premier’s Rod Freeman said, “We are delighted to welcome Michael to the team and really excited about the strength he adds to the squad. There will be two or three more foreign riders to announce over the next few weeks and 2012 is starting to shape up well.”

The appointment of Berling has also led to tyre sponsor Vittoria bringing their Pave CG tubulars and tyres into the team for specific races like Dengie Marsh, Tour Doon Hame and Cicle Classic.