The men’s road cycling time-trials takes place on Wednesday 1 August, starting at 2.15pm and taking riders on a 44km route starting and finishing at the historic Hampton Court Palace in south-west London.

In Team GB, Tour de France winner Bradley Wiggins and runner-up Chris Froome will carry Great Britain’s medal hopes. The two demonstrated their time-trail capabilities in the Tour de France, storming to 1-2’s in both individual time trials after the prologue, Wiggins the winner on each occasion.

On his way to becoming Great Britain’s first winner of the Tour de France, Bradley Wiggins’ time-trialling was key to his triumph. Second in the opening prologue to Olympic champion Fabian Cancellara, the 32-year-old turned the tables in stage nine’s Arc-et-Senans to Besançon, beating Cancellara by 57 seconds on the 41.4km course, similar in distance to London’s route.

It was in the penultimate stage from Bonneval to Chartres however, when the three-time Olympic gold medallist delivered arguably the greatest time-trial performance of his career to date. Cancellara had already withdrawn from the Tour but Wiggins was untouchable, storming to the stage win a whole one minute and 16 seconds ahead of Froome over the 53.5km.

Prior to that success, Wiggins won the final TT stage of Paris-Nice to wrap up the overall win as well as stage four of the Criterium de Dauphine. For the time-trial silver medallist in the 2011 UCI Road World Championships, his form could not be better coming into London.

“The benchmark is there really from Saturday in Chartres [in the Tour de France]. So nothing is going to change from that performance to Wednesday,” Wiggins said.

“I have 100% faith in the training Tim (Kerrison) has set me and it is more mental than physical. I think that I have done enough now to realise that there is no reason it is suddenly all going to collapse on Tuesday night. My performances all year have been consistent so I have no reason to think that is going to change so that comes with age and experience.”

Whilst Wiggins’ domination of the time-trials in France stole many of the headlines, in Chris Froome Great Britain has another talented individual in the time-trial discipline. Froome’s second in the stage nine TT was notable for the fact he finished ahead of Cancellara. He then confirmed his runner-up place in the Tour with a sterling ride in stage 19, again only outdone by Wiggins.

Like his teammate, the 27-year-old had showcased his skills prior to Le Tour. Sixth in the stage four TT of the Dauphine, shortly after returning from illness, he also ended second behind time-trial world champion Tony Martin and one place ahead of Wiggins in stage 10 of the 2011 Vuelta a Espana.

“All I can do really is go in there and give it my best shot. Brad I think is in the perfect stead for that and the course suits him really well,” Froome said ahead of Wednesday, as he looks to win a first Olympic medal and enhance his burgeoning reputation. 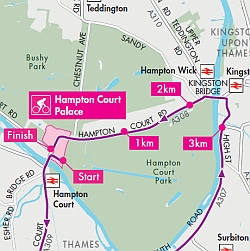 A former royal residence based on the banks of the River Thames in south-west London, Hampton Court Palace will provide a spectacular setting for the start and finish with the 44km distance competed over a single lap.

A relatively flat-course, the 44km is similar to the distances which Wiggins and Froome enjoyed in the Tour, but also presents some technical sections which riders will need to be wary of if they aren’t to lose unnecessary seconds.

Reigning Olympic champion Fabian Cancellara is considered favourite by many. Having withdrawn from the Tour early to focus on defending his Olympic title he has had additional rest to Wiggins and Froome, however the Swiss rider crashed in Saturday’s road race and whilst he suffered no broken bones, it remains to be seen how much physically and mentally he may be affected.

The 2011 world champion Tony Martin also withdrew from the Tour early with a broken wrist, at the time saying: "I have still three weeks before the Olympics. I know that it won't be easy, but I will do all my best to be in good shape." His withdrawal means the German failed to compete in either of the individual time-trials after the prologue, during which he punctured. It leaves his form coming into London as somewhat of an enigma.

The men’s time trial will be broadcast live on the BBC, on their red button and online services: http://www.bbc.co.uk/sport/olympics/2012/sports/cycling-road.