British Cycling has added further names to its high-profile line-up of international and domestic speakers for Coaching 2012: an annual coaching conference being held at the University of Birmingham in May. 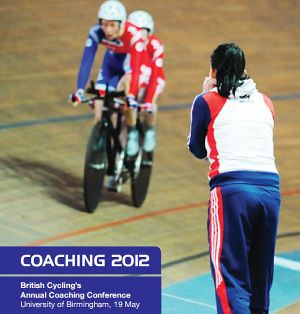 In addition to the names previously announced, the expertise of Professor Richard Davison, Richard Cheetham, Lionel Reynaud and Nikos Ntoumanis have all been confirmed.

In the year of a home Olympic Games, Coaching 2012 is a unique opportunity to reflect upon and celebrate the significant progress made in UK coaching since the 2000 Sydney Olympic Games.

Taking place on the 19th May, the conference will deliver a diverse programme of speakers supported by practical and academic workshops, ensuring that the conference appeals to cycling coaches across the performance spectrum.

For full details of how to attend Coaching 2012 and for a full line-up of speakers, please click here.

Prof. Richard Davison, British Cycling Coach Educator - Prof. Davison is an Emeritus Professor at Edinburgh Napier University and is the current Chair of the Cycling Science Steering Group of the World Commission of Science and Sport and former Chair of the British Association of Sport and Exercise Sciences (2006-2008). He is also an editor of the Journal of Sports Sciences and an expert reviewer for the Journal of Sports Sciences, the International Journal of Sports Medicine, European Journal of Sport Sciences, International Journal of Sports Physiology and Performance, Journal of Science and Medicine in Sport, Medicine & Science in Sports & Exercise the Welcome Trust and the Medical Research Council. Prof. Davison has spent over 20 years investigating the factors that influence cycling performance and the physiological responses to cycle ergometry publishing in excess of 50 scientific papers and book chapters.

In addition Prof Davison also tries to practise what he preaches as a competitive cyclist he has won 10 medals at Scottish Championships, including 6 gold medals. Richard also represented Scotland at the 1994 Commonwealth Games in Victoria as a cycling coach and he continues coach rider at all levels. He is very heavily involved as a tutor with the British Cycling and the UCI Coach Education Schemes helping to train the future generation of cycle coaches around the world. He is also a National Trainer for UK Anti-Doping.

Richard Cheetham - Richard, Senior Lecturer in Sports Coaching, joined the University of Winchester in 2005 from New Zealand. He was lecturing on a degree in Human Performance as well as developing a broad coaching portfolio. His work involved sport science and coaching support for the national white water kayaking squad and the New Zealand academy of Sport as well as with club and provincial rugby.

His approach to teaching has been recognised by achieving the University Chancellors award in 2010 (the first one to be awarded as a result of student nomination) and was short listed for the 2010 Times Higher Education award for Innovation in Teaching. In the same year he completed the Atacama Desert crossing, 6 marathons in six days and has since then completed further adventure races including the Scotland Coast to Coast race.

Richard has submitted a chapter on coaching and learning for a new text due out in May 2012. The completion of this book will be the start of encouraging others to develop an engaging, challenging and yet rewarding coaching style and approach. It is the culmination of work to promote a belief in coaching philosophy and practice which encourages creativity from the coach and aims to remove the constraints often faced in coaching settings. Previous conference presentations on this have been for Sports Coach UK and Leisure Review.

He is a Coach Educator for London South and Hampshire RFU as well as continuing to coach at his local club Basingstoke RFC.

Lionel Reynaud - Lionel has been at the sharp end of pro cycling for over a decade, although he first joined forces with Great Britiain cycling's team through his work with the then Cofidis rider, Bradley Wiggins. The relationship developed as Lionel has since worked closer with British Cycling across many areas of elite performance and coach development.

The aim of Lionel's coaching philosophy is to put the rider in the centre of all the competences available to enhance his skills: techniques analysis, physiology, biomechanics analysis, aero optimisation, tactics, perception, psychology…

All this performance enhancement process has a double goal: the first and the main goal is to help riders progress, the second is to help the coach to safeguard the rider's health.

Nikos Ntoumanis - Dr. Nikos Ntoumanis was born in Kos, Greece, and has lived in the UK since 1993. After completing a PhD on the relationship between achievement motivation and anxiety in sport, he worked as a research assistant and lecturer in various institutions in the UK. He moved to Birmingham in 2001 to take up a Lectureship in Sport and Exercise Psychology.

Dr. Ntoumanis's teaching is primarily in the second year of the BSc in Sport and Exercise Science. He is responsible for a compulsory module entitled Statistics for Sport and Exercise Science. He uses a wide variety of interactive teaching methods both in his lectures and in his computer labs and he is a strong advocate of learning through problem-solving and peer tutoring.

Nikos specialises in the psychological experiences of children in sport and in physical education, in particular issues to do with their motivation; motivation of adults to participate in exercise programmes; goal striving related to weight loss.