Lukas Nowacki extended his lead in the HSBC UK | Cycle Speedway Elite Grand Prix Series under the shadow of the Humber Bridge with a second win in as many rounds.

Chris Timms, who took the series title in 2018, had to be content with second place on the infamous Hull track after losing out to Nowacki in the 13th heat.

Pawel Idziorek took third on the day after a run-off that saw the Pole get the better of home riders Andy Angell and Nathan Everett – who finished fourth and fifth respectively.

And Nawocki was pleased to see his hard work pay off with a second consecutive victory to follow his triumph in Round 1 in Exeter back in April.

“I’m not going to say I wasn’t expecting it,” he explained. “I was hoping, maybe not for the win, but definitely for the top three. Training is getting harder but I’m enjoying it.

“It’s the first time I’ve ever been here and the track is really, really lovely. It’s great surroundings as well – you can see the Humber Bridge from here – so I’m even happier to get a win.”

Although a reduced field took to the gate, the match proved to be a close affair from the opening heat.

Timms took easy wins in his opening two heats and Nowacki responded with victories in his opening races – although with Adam Watson and Angell tied to his back wheel, his triumphs were harder fought.

Everett made the most of home-track advantage by crossing the line first in the eighth heat and a second-place, behind Nowacki, in heat 12 kept him at the sharp end of the match.

However, it was ultimately the following heat that proved to be the match decider. Contesting back-to-back heats it was always going to be a tough call for Nowacki lining up against Timms but a flying start meant

Timms had pretty much no way past the eventual winner.

“Heat 13 was my second on the trot – which people who race know how hard it is,” added Nowacki. “That was tough on my legs, so I had to rely on my experience to keep Chris where I wanted him to be.

“There’s no half-measures with Chris – he always races to the line and I have great respect for him. He’s one of the most entertaining riders in the UK at the moment.”

Although it was the first time Nowacki had rode the track he held all but a perfect line to claim victory and, barring any issues in his final heat, the win was pretty much confirmed.

Timms triumphed in heat 17, in the face of a challenge from Mike Baldock, to claim second spot overall but the day belonged to Nowacki, who took the chequered flag in heat 18 and the match victory.

“It took a crazy dive to actually win this meeting,” he added. “I knew if I was second in my last heat, I would’ve had a run-off with Chris, which I’d rather avoid. I took a punt and it worked out nicely for me.”

Owen Wells took the points in the junior match without turning a wheel.
Wells, being the only rider to present at the start, was allowed to claim the points and the series lead. 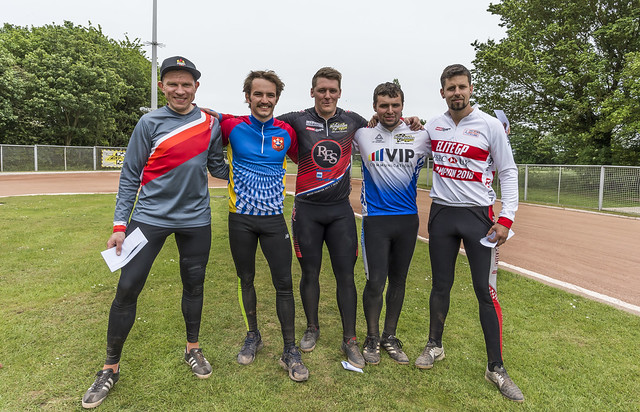