This weekend sees the arrival of the Olympic torch in Manchester, the home of British Cycling, after being lit in Greece, from the sun's rays at the Temple of Hera in Olympia, in a traditional ceremony amongst the ruins of the home of the Ancient Games.

The Olympic Flame arrived in the UK on 18 May 2012 before setting out on a ten week Olympic Torch Relay. It will be carried around the UK by 8,000 Torchbearers. Ahead of this weekend’s event, we look at five truly inspirational individuals who will carry the Torch and who have made a great mark on our sport in recent times. 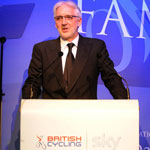 Brian is a lifelong cyclist who competed in road racing at a modest club/regonal level from his teenage years, winning a small number of races including the Lakeland Division Senior Championship in 1971, until his mid-thirties, when family and career demands took over. Brian was elected to the Board of British Cycling in 1996, taking on the roles of President and Chairman, which he has held ever since. He then became a Division official, acting as Road Race Secretary and managing teams at events such as the Tour of Ireland, Circuit des Mines, National Championships.

He qualified as an International Commissaire of l’Union Cycliste Internationale (UCI) in 1986, and was apppointed to World Road and Track Championships and to numerous international events from then until 2005 including the Barcelona Olympic Games in 1992.

More recently he has returned to participation, completing events such as l’Etape du Tour, Gran Fondo Pinarello, and the Pyrenees Coast to Coast. In 2011, he competed on the velodrome in both the National and World Masters Track Championships in the endurance events, winning a bronze medal in the Points Race at the former, and finishing 12th in the 5km Scratch Race at the latter, in his age category. On being selected to be a torchbearer for the Games Brian said:

“I am of course delighted to have been nominated and chosen to carry the Olympic Torch and am looking forward to the occasion immensely. I feel that, as President of British Cycling, I am not just there as an individual but also as a representative of the whole sport of cycling; our members, our clubs, our staff, and the volunteers - all of the people who keep the sport running behind the scenes. Without these individuals, there would be no Olympic sport, no Olympic Team and no Olympic Medals to be won. I'm proud to be associated with all of these people, from Olympic champions to the youngest novices, especially in such a golden era for our sport and pastime.” 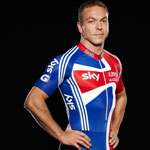 Sir Chris Hoy almost needs no introduction as he has earned himself the reputation as one of the most familiar names in cycling. After starting cycling at the age of seven, Sir Chris came to prominence after winning a Gold medal in the Kilo at the 2004 Olympic Games in Athens. Since then, Chris has gone on to win a multitude of rainbow jerseys on the track culminating in his achievement of becoming the most successful British Olympic Cyclist of all time when he achieved a hat trick of gold medals on the track in the XXIX Olympic Games in Beijing in 2008. Sir Chris Hoy has recently been named in the 22-strong Cycling Squad for the Games this summer. On being selected by Lloyds TSB to become an Olympic Torchbearer this weekend, Chris commented:

"I’m very excited to have been selected as an Olympic Torchbearer by Lloyds TSB, and I’m really looking forward to carrying the flame in central Manchester on Saturday." 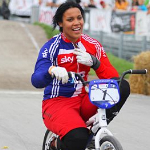 Shanaze began her career on the BMX track aged 10 and by the time she was 17 she was Britain’s number one female rider. Shanaze has been crowned world champion in every year she has competed from 2006 to 2008. In the 2008 UCI BMX World Championships she stormed away from the competition in the finals and took the World title by several lengths. The Beijing Olympics in 2008 saw Shanaze compete in the inaugural BMX competition. She started as favourite for the Women’s title, but crashed out on the last bend in the final as she tried to overtake the eventual winner Anne-Caroline Chausson. However, her win-at-all-costs approach and aggressive style won her many admirers. The 2009 season saw Shanaze unable to defend her World BMX Championship title following an operation on her injured shoulder, but in 2010 she was back to full strength and regained the world title. In 2011, Shanaze won the Olympic test event in London as well as becoming the first ever World BMX Time Trial Champion. On being selected by Lloyds TSB to become an Olympic Torchbearer this weekend, Shanaze said:

“I am thrilled to be carrying the torch on the Salford leg of the relay. To be part of something so special, involving so many inspirational people, is a real honour and something that I will remember for the rest of my life. Thanks to everyone involved and to all the Torchbearers, they have had to deal with some typical British weather over the last month! I look forward to seeing, (and hearing) everyone at the Games in August.” 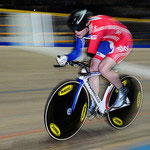 Jon-Allan joined the British Para-Cycling Development Programme via Battle Back, a joint scheme between Paralympics GB and the MOD which helps wounded service personnel return to an active life with the help of adventure training and sport. Jon-Allan joined the RAF in 2002 and served in Afghanistan in 2005 and Iraq in 2007 as a SAC(T) Weapons technician. He lost his left arm in Iraq on 4 August 2007 where he was involved in a rocket attack on Basra Air Station. He was operated on by doctors in a battlefield hospital who carried out an above the elbow amputation of his left arm. Since being inspired by the 2008 Beijing Olympic Games Jon-Allan, as part of the Great Britain Cycling Team, has gone on to win the accolade of world champion in the Kilometre in his category in both 2011 and again in 2012. On being selected by Lloyds TSB to become an Olympic Torchbearer, Jon-Allan had this to say:

“I feel extremely privileged to be one of the chosen few to represent the cycling community in carrying the Olympic Torch.” 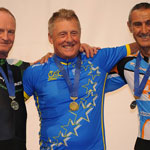 Geoff who was born in Manchester, started cycling after having come from football and almost immediately won the East Midlands Divisional Road Race. He was selected to represent Great Britain in the 1972 Olympic Games in Munich and at the 1974 Commonwealth Games in Christchurch, New Zealand, where he won Gold in the Tandem Sprint. In addition to this, Geoff was National Track Coach at British Cycling for ten years from 1979 to 1989. During his time working at British Cycling, Geoff met the then young sprinter in Chris Hoy. Geoff was involved in helping Chris trackside during his early training sessions on the track. Since then Geoff has been a very successful Masters Champion winning a total of 25 World Masters titles along with nine European Masters Titles. Geoff has also won nothing short of 48 National titles which he describes in his own words as a ‘fantastic journey’. Geoff has been nominated by Sir Chris Hoy to carry the torch and commented that:

“I have known Sir Chris Hoy since he started cycling on the track and have watched, not always from a distance, as he has climbed the ladder of fame. For me to receive his nomination to be a Torchbearer for the London 2012 Olympics Relay is honestly the greatest accolade I have ever had. Chris is a truly special person, everyone knows that, but when I carry that torch on 23 June in Manchester he will make me special, for a little while.”

29 year old Claire was national junior time trial champion and represented Great Britain at both the track and road junior world championships. In 2006 Claire had an accident whilst racing in Tasmania, resulting in a brain haemorrhage and a broken back. Although this ended Claire’s cycling career and her dreams of becoming an Olympic athlete, Claire maintained her involvement in sport, heading up Channel M’s Sport Central as well as working closely with Manchester City Council and the Sport and Leisure Trust, working on grass roots schemes. Claire will carry the torch through Reedsholme on 23 June.

The Torch will begin its journey tomorrow morning from Lytham St Annes and head to Manchester City Centre. On Sunday, It will leave Salford and head to Leeds. Full route information can be seen by clicking here.

In addition to the cycling luminaries carrying the Olympic torch this weekend, several young people who’ve made invaluable contributions to our sport have also been honoured with the chance to carry the flame.

Emma Hayes from Cheshire carried the torch through Cockermouth in Cumbria on 21 June – Emma is a British Cycling Gold Young Leader award winner and won North West Young Volunteer of the Year award for her work with local clubs.

James Unwin from South Yorkshire has overcome severe dyslexia to become a fully qualified coach at the age of 16. The recipient of British Cycling’s Gold Young Leader Award and Yorkshire Young Volunteer of the year, James will carry the torch through Sheffield on Monday 25 June.

The late Brian Wright, who sadly passed away earlier in the year, had been nominated to carry the torch through Easebourne. Brian’s 15 year old granddaughter, Elizabeth Whiting, will take Brian’s place on 16 July.

Brian, Emma and James were nominated through Sport England’s nomination process and joining them, through a nomination from the British Olympic Association, will be 19 year old Matt Wise from Brighton. Matt, like James and Emma, is also a Gold Young Leader and South East Young Volunteer Award winner, earning the latter accolade for his member recruitment work at Shoreham-on-Sea Go-Ride Club VC Jubilee. Matt will be carrying the torch through Hastings on 17 July.