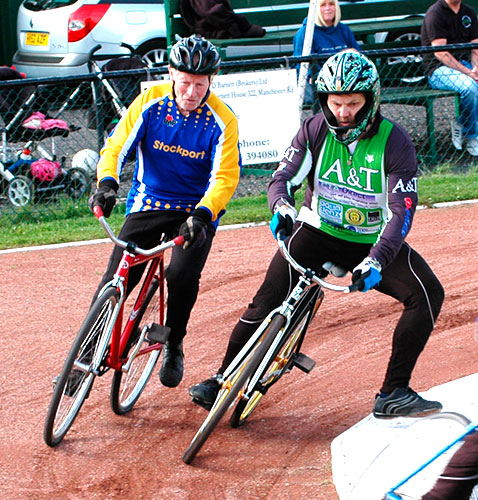 Everybody at British Cycling is deeply saddened to learn of the passing yesterday of Derek Garnett, at the age of 83.

Derek is widely accepted as one of the all-time greats of cycle speedway, having won four British Open Individual titles (the second highest number of any rider), runner-up in the 1962 World Individual Final, eight British Team Cups, the inaugural British Over-40 Individual title at the age of 50, and numerous regional, local and open titles.

He started racing in 1951 with his local club in Stockport, Offerton, where he spent most of his racing career. He also raced for the Wilmslow, Blackley/ Manchester and Bury clubs. As well as being a brilliant rider, Derek was also a superb team manager, regularly helping his teams to punch above their weight and win championships against teams who often appeared much stronger on paper.

Derek's last season as a rider was in 2012, at the incredible age of 75, when he was still regularly turning out for his local Stockport club in Northern League Division 2 matches.

Derek also edited the monthly Manchester League Bulletin for many years and served as Vice Chairman of the Manchester League. He was a genuinely warm and friendly man, always willing to offer advice to younger riders. An inspiration to many within the sport for well over half a century, he was a true legend and will be sadly missed by everyone who knew him.

The thoughts of everybody, both at British Cycling and in the wider cycle speedway community, are with Derek’s wife June and other family members, of whom daughter Julie and grandson Ben are still active members of the Stockport club, as well as his many friends.