The 28-year-old from Dunfermline was part of a six-rider break which got clear late in the race and stayed away to the end, with her team-mate Henrietta Colborne taking second and Drops CT rider Rose Osborne third. 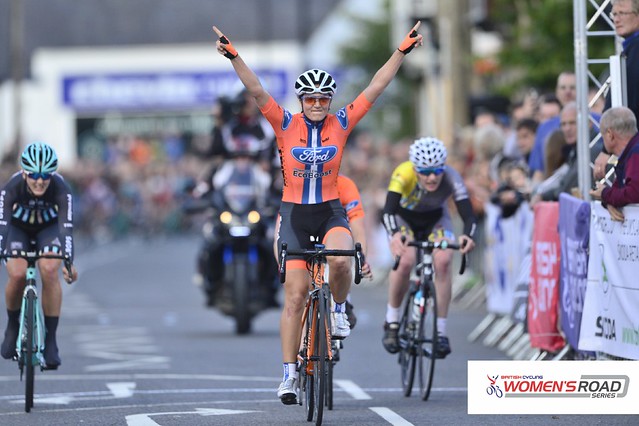 The opening lap was run off at a fast pace, and National Road Race Championship silver medallist Alice Barnes (Drops CT) was on the front and driving it hard.

She had the Series win in the bag even before turning a pedal in Otley, but Nikki Juniper (Ford EcoBoost) was not prepared to sit back and she hit the front herself shortly after.

With Drops CT and Ford EcoBoost driving the pace on it wasn’t long before the race split in two with only the strong riders able to stay in the mix.

Hannah Payton (Drops CT) and Ford Ecoboost’s Lizzie Holden escaped with eight laps to go but they were not allowed to stay clear for long before the bunch swallowed them up, but another Ford Ecoboost rider went clear in the form of 18-year-old Henrietta Colborne.

But it wasn’t long before that break too was pulled back, and the bunch was led round with Juniper marshalling it on the front.

Team Breeze were flexing their muscle mid-race, just as the second bunch were about to be swallowed up, but they weren’t allowed too long on the front as Drops and Ford EcoBoost continued to boss the race.

A break of six riders went clear with five laps left, and with two riders each from Ford Ecoboost (Joiner and Colborne) and Drops (Rose Osborne and Hannah Payton) the chase from the bunch was somewhat stunted.

They stayed clear, and in the sprint Joiner took the win by inches from team-mate Colborne and Osborne.

“Now that Nikki has won the Series we weren’t riding for any particular rider,” explained Joiner. “It was quite nice because it gave everybody the opportunity to just go out and ride.

“The plan was to be in every move and instigate moves and chase down people, and we definitely did all that.

“After two laps of being away we thought we might be able to carry on. We worked well as a group and did what we could. Over the last two laps the bunch was catching us, but we just held on. I knew I had a good sprint so I just had to get to the end. Henrietta attacked on the last lap and the others had to go after her, which helped me in my sprint.

“It was really great for her to get a good result as a young rider, and it was great for the team.”