Grace Garner timed her attack to perfection to win from a breakaway of three and take her second successive Essex Giro title in the HSBC UK | National Women's Road Series.

The Wiggle High5 rider got away with four laps to go with Chanel Mason, of Storey Racing, and Ford Ecoboost's Charmaine Porter, with the trio quickly establishing a commanding lead.

Their advantage, at one point up to a minute, came down to under 30 seconds with two laps of the eight kilometre circuit to ride, but a long turn from Mason on the front killed off any hope of the peloton catching the leading three.

But it was Garner who got the better of her rivals in the finishing straight, launching her attack to leave Mason trailing and while Porter went with her, she could not hold on as Garner won the race for the second year in succession.

Storey Racing’s Mason, third in the opening round of the series at the Tour of the Worlds, launched an attack almost as soon as the flag had dropped, but after five minutes of chasing the peloton soon brought her back into the fold.

With two laps gone and the field still all together, Mason tried once again to get away, but Elizabeth Banks’ SunSport Velo team were marshalling the front of the bunch well, aiming to defend the Tour of the Wolds winner’s Series lead.

Garner, fresh from a stint racing on the UCI Women’s WorldTour with her Wiggle High5 colleagues, continued to sit in the field keeping an eye on the race.

But with Hannah Larbalestier and Gabriella Nordin marshalling the front for SunSport Velo, she had little to worry about with no-one able to get away – even on the punishing climb in the final three kilometres of the circuit.

1/2 We had bad luck today but the team showed incredible cohesion and unity despite adversity and the girls worked so hard together!

With the laps ticking away it was Ford Ecoboost’s Kelly Murphy and Team OnForm’s Sian Botteley that were the first to break clear of the peloton.

But they were soon reeled back in and, as the pace was upped the bunch began to shrink with riders being spat out the back of the peloton.

Banks herself did the brunt of the work to bring them back, with Garner again sitting in the wheels and conserving her energy.

Ford Ecoboost were also a constant presence on the front of the field, but when the decisive move came they were powerless to stop it.

With four laps to go Mason, Porter and Garner launched their attack, with the trio soon establishing a lead on the field.

SunSport Velo pegged their advantage at 15s for a while, but they could not chase forever and the break soon had a minute over the peloton.

With two laps to go that advantage quickly dropped under the 30s mark, but Mason was quick to react and a long pull at the front edged it back over 45s.

So with the front three away it was left between them to fight it out for the win, with all Mason’s efforts throughout the day costing her in the closing stages as Garner attacked and she could not go with her.

Porter tried to bridge the gap but she didn’t have the legs either, and Garner was left to cross the line, arms aloft, for her second Essex Giro win in as many years.

I was nervous without my @WiggleHigh5 teamies but happy to get my hands in the air on home soil #thatfeeling thanks for a good race girls! https://t.co/sz5VSlf1x5

Banks suffered a crash just before the decisive breakaway went clear, but made it back into the pack thanks to fine work from her teammate Liz Burrows.

However, an 11th-place finish for the Tour of the Wolds winner was not enough to keep her in the overall Series lead.

Mason’s attacking day not only saw her pick up the most combative rider award, but also take over the lead of the HSBC UK | National Women’s Road Series standings by 12 points from Banks – with Storey Racing also now leading the teams standings. 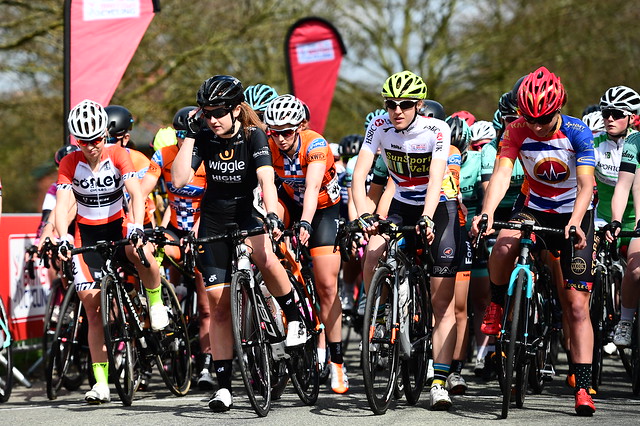