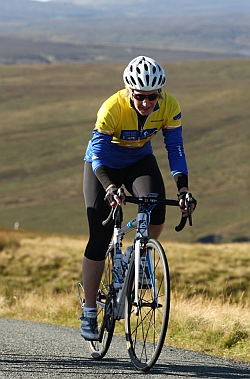 At the end of last year I had my heart set on launching my first sportive season with the infamous closed road Etape Caledonia. To my dismay a calf injury thwarted my ambitions. So when I saw the website article regarding the inaugural Etape Pennines - delighted that I would be able to ride a closed road event after all, I signed up immediately.

As September drew nearer I noticed a competition on the Etape Series Facebook page offering the chance to ride upfront with Rob Hayles and two free places for the sportive were up for grabs. I applied and a few weeks later I found out that I had actually won!

After all the months of suffering I have put riding partner Ross through it was nice to be able to give him something back and I offered up the free places to him and my brother - I thought it would be fitting that we could finish the season together in style! It was only when my brother asked me how tough it would be that I looked at the course to see a loop on the map dotted with numerous categorised climbs. Not quite like Caledonia after all, in fact it was being billed as one of the toughest sportives in Britain.

Somewhere in the region of 1500 people has signed up to participate in England’s first closed road event and after a summer of rain, wind and generally miserable riding conditions we were blessed with a beautifully crisp autumnal weekend.

We registered on Saturday afternoon in the grounds of Ushaw college where we met Ali from IMG Challenger World to receive our complimentary souvenir road jerseys and the kind invitation to come to the media centre the following morning for breakfast and to meet Rob Hayles before making our way to the start line together. All very civilised and all very organised. No sweat.

After scraping the ice from the car at 5.30AM on Sunday morning we set off for the event in plenty time to make the short journey from our overnight accommodation. Then the navigational gremlins struck and we arrived at the event HQ with very little time to spare - I was wearing my GGCC jacket and by sheer luck it was this that drew the attention of Ian Phillips from British Cycling. He spotted me in a flap trying to convey at 19-to-the-dozen to a bewildered event steward that I was meant to be on the start line with Rob Hayles and I was holding up the whole event!

Thankfully we had minutes to spare and Ian darted into a field to retrieve his track pump to inflate my tyres and attach my timing chip - I don’t know what I would have done without him! We made our way past the waves of riders to the front where I briefly met Rob Hayles, chatted to Matt Littler who looked rather terrified at the prospect of what lay ahead and after the obligatory photos we set off at 7.10AM as the sun was just starting to creep over the horizon.

Starting in the early waves with elite riders is a very different experience to my usual amble out the blocks - there is no way I was going to hold pace with these guys but I managed for the first few miles until we hit a cheeky little Cat4 climb just a few miles in and my brother and I were dropped like stones.

Fearing for our ability to ride another five miles, yet alone another 70, we admitted defeat and settled into our own rhythm. So I can't tell you what it's like to ride with an ex-pro but Ross can. I was delighted for the first time ever to not actually see him for 16 miles as I knew he was gunning it – we found him shivering patiently at the first feed station and discovered he had held his own with the lead peloton sitting on Rob's shoulder for the first part of the course and he was ecstatic, yet he too had enough of playing with the big boys as the course began to show glimpses of the monumental climbs that lay in wait.

I don’t think I’ve ever seen an 18% or 20% gradient sign before on my bike but they appeared with frequent regularity and I can’t honestly say whether it disheartened me more to see the black line sloping up or down.

The climbs were seriously difficult and not quite like anything I have ever encountered but the descents were equally as eye watering. I managed to clock 48.5mph coming down into St John’s Chapel and I’m sure there’s a spike on my HR profile when I crossed an unexpected cattle grid half way down.

I’d like to be able to write about the hills in chronological order but I don’t remember which was which. I remember them all hurting. I remember being out of the saddle more than I was in it, passing lots of people walking with their heads hung low. I remember the descents not being long enough. I remember feed stations dotted high on hill sides. I distinctly remember looking into the distance at the ribbon of concrete winding its way up the next rise and thinking I had to call on every last bit of reserve within me to carry on.

The really testing segment started at 40 miles with the King of the Mountains timed section up Chapel Fell and it eventually tapered off some 20 miles later after back-to-back Cat4, Cat3, Cat4, Cat3 climbs. Had the weather been anything less than perfect I would have given up and gone home but the sheer expanse and beauty of the wilderness up there was so immense and so breathtaking in the clearness of the early morning sun that it was impossible not to smile and thoroughly enjoy the day.

There followed a lovely long section of easy to moderate riding before a sharp right hand turn where there was a wonderful lady shouting from the roadside ‘Change down - it’s steep!’ I dutifully did as told just in time and turned the corner to the cacophony of crunching from less obedient cyclists. My tired legs battled up the wall of tarmac and up and over yet another crest. We reached familiar territory having driven this section of hedge-lined road the previous day and knew the end was in sight but unfortunately that came with the knowledge of the hellish Cat2 climb a mere three miles from the finish line. It finished off so many people - I had to stop but dared not tarnish my cleats on the gravel!

I thought back to a moment earlier in the course when I had shamefully walked less than 100 yards up a particularly steep little section and a passing rider offered the wise advice of “Just get back on, the pain will be over quicker!” Composure regained I powered on to the top and clubbed together with Ross and Colin to find some collective energy for some speed in the last two miles and a final sprint finish for the line which they both well and truly beat me on!

My course time wasn’t great, it never is. I ride sportives to complete them, to meet people, to see new places and to challenge myself whilst having a good day out on the bike. For someone who started a season fearing hills and spent the most part of the year making painstakingly small gains on local climbs I am delighted with the fact that I completed the route on Sunday.

It was a befitting end to a sportive season packed with highs and lows, drama and injury, self doubt and self discovery. I have met many people from all walks of life both old and young alike, I have cemented a firm friendship with a riding buddy who has sacrificed his own fast miles and helped me through some dark times on climbs that I thought I would never see the top of. I’ve experienced just about every type of weather the great British Summertime had to throw at me and I’ve achieved more in my first season of road biking than I ever thought would be possible. I’m happy with that!

Etape Pennines is not an event to just pick off the calendar and tackle without some serious training, but give it some gusto in the preceding few months and get out there next year. This is not one to be missed. I’ll see you there!