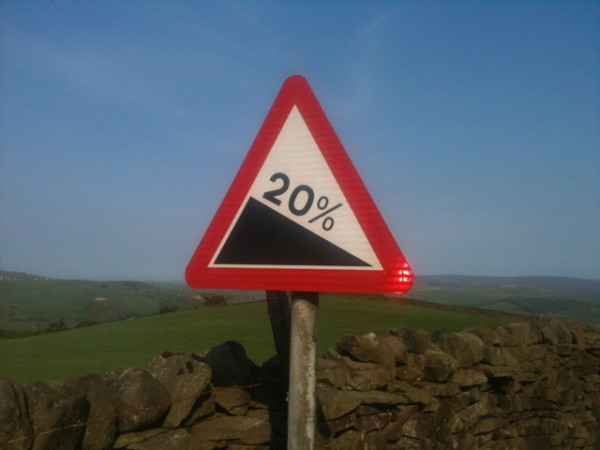 "Where there are uphills, there are downhills and it’s only sixty miles". That was my mantra the evening before the Colomba Chemo Classic.

And anyway I’d been to the Alps and conquered the Galibier, Alpe D'Huez and the famous Marmotte route. So this would be a walk in the park, right? Nothing to worry about…

I arose at 6.30am on Saturday morning and couldn’t sleep any longer, eagerly anticipating what was going to be an epic adventure, whatever the result. The starting station was actually two miles away from my home village of Hudswell, in Richmond but there was no way I could even contemplate adding any more miles onto my route and ride to the start.

Arriving at the event HQ it was the first time I’d really seen such a big number of riders clad in lycra, baggy mountain bike shorts and jumpers (!) all together in one place. There were all sorts of riders about and it was great to see. My preparation had been good compared to some. Alex Dowsett had travelled from Birmingham and already taken on the challenge of the M1’s long stretch of 50mph speed limit cameras in the early hours to make it for the start.

I didn’t hang around too long to chat to anyone and by 8.30am I was off. It was time to hit the road and with the sun already peering out beyond the early morning clouds, it was a perfect day for bike riding. Anyone from this part of the world would tell you that temperatures over 10 degrees and peeks of sunlight in November are a rather unusual occurrence. A welcome one though.

The route of the Colomba Chemo Classic is generally ‘hill free’ for the first ten miles. It sets off out of Richmond through Wensleydale towards Leyburn and into Middleham. I was fully prepared for what lay ahead though. A hydration and nutrition strategy was firmly in place and all I had to do was stick to it and enjoy myself.

After an hour’s riding I was deep into Coverdale and its unique roads amid stone walls and sheep! From here there would be no let up in the terrain, not even on the hairy descents that waited on reaching the top of each climb.

Above: Man in a jumper on an old touring bike beats the lycra boys up one of the Colomba's killer climbs!

‘Park Rash’ was the first real challenge the riders faced. It starts after the village of Horsehouse and climbs over into Kettlewell. The climb includes two very steep sections – the first of which comes after a sharp left hand bend and a very steep drag up. The road continues as the terrain begins to rise again before a 20% uphill bend has even the best riders gasping for breath. Thankfully though, my reliable old steed was suitably geared (11-28 cassette for you geeky ones) to tackle such pain and I even posed for the awaiting photographer at the top!

Time for some food, and the challenging descent into the picturesque village of Kettlewell. It’s not all easy going though and the very fact that an ambulance was waiting at the bottom of the descent of Park Rash tells you all you need to know about that.

By this point I was in good spirits, my eating ‘strategy’ was working a treat and I had conquered the toughest climb. So it was time to get into the groove and push on to the feed where I could recuperate before attacking the last 25 miles home. It wasn’t quite as straight forward as that and the climb of Kidstones Pass between Bishopdale and Newbiggin had my legs feeling like I was pedalling squares.

I did manage to get over the top of that despite being passed by what felt like every other rider on the course, and a beautiful descent into the feed station offered some well earned respite and a drink!

It was a welcome break and I was on course for a decent time as well, but it was here I made a critical error. Soups, flapjacks, cakes and about every other perfect food for that point on time was on offer from a great group of volunteers who had worked tirelessly to provide such excellent amenities. I should have eaten sufficiently, I didn’t. The next 25 miles would be harder than I had originally anticipated.

Out of the stop in Thoralby, the road climbs steeply for a few miles into the scenic village of Aysgarth where you’re signposted down through a couple of steep descents in the village (one guy broke his thumb) and over a lovely bridge before it crosses over into Swaledale.

Down the road for a few miles and the final challenge awaits, Greets Moss. whose name alone sounds horrible. And it is. The sun was now shining in all its glory and for just one minute it was pleasing just to be riding in such fabulous surroundings.

Above: Fighting fit. Organiser Rob Knibbs has helped raised thousands of pounds for Cancer Research through the ride over the last three years

The climb hits you instantly as you go under a small bridge and the road rises steeply before flattening out. I did feel at this point like the hardest part of the ride was behind me and I managed to find a consistent rhythm that had me climbing steadily. The road is bumpy though, challenging every pedal stroke as your eyes become transfixed on the brow of the next rise in the road. Still you can’t see the top until a sharp right hander offers up another 20% push before the road finally flattens out and you can follow the road to another cattle grid that marks the end of the climb.

The descent into the village of Grinton is beautiful. Hands were on the drops and I was sweeping through bends at speed, enjoying for me what was a familiar setting of sunshine on the small town of Reeth in the distance. From the bottom of the descent, the main road leads back and a steady ‘home straight’ in to Richmond. For the brave souls (and the very fit ones) the route throws up the challenge of taking on two more climbs, but after 60 miles that was enough for me.

The Colomba Chemo Classic sportive was in its third year, and with the help of Great Britain and Team Sky’s Ben Swift and Alex Dowsett as patrons, it had over 400 entries. From the young to old, newbie cyclists to old timers, from Essex wide boy to Geordie local, people had entered from right across the UK to take in 63.5 miles of road through Coverdale, Swaledale and Wensleydale to experience some of the toughest climbs about. In addition to the charity dinner (which ended with an inspiring speech from James Goulding), that raised over £1000 alone for Cancer Research, it is hoped that the event can inspire people to challenge themselves for years to come.

Above: Easy peasy: Alex Dowsett (left) and Ben Swift (right) race to the top of the climb

I arrived back into the HQ, and I was just smiling. It’s a simple philosophy really, I just enjoy riding my bike in beautiful countryside. And this route takes some beating.

Thanks to Stuart Watson, Rob Knibbs and the rest of the Colomba event team for a wonderful event in 2011.