Cycle Speedway is essentially a club sport, with inter-club matches within leagues the mainstay of the sport. Each match normally consists of between sixteen and twenty races! There are also individual championships, including a World Championship and some inter-country series, including regular "Ashes" contests between England and Australia.

Top riders are explosive sprinters - but they also have stamina to enable them to keep going through a long match. Skill levels are high with slick starting, cornering and passing techniques essential. Strength is also required during contact with other riders.

Cycle Speedway Bikes are as simple as BMX or Track bikes - there are no gears, brakes, brackets, quick-release fittings, etc. Frames are often converted from mountain-bikes. Clothing is pretty conservative - most riders cover themselves from the neck down to protect against falls - and, of course, a helmet must be worn. Contact is expected, so many riders wear additional protection such as knee, elbow and hip pads.

Cycle Speedway racing takes place across the length and breadth of Britain. Many of today's tracks, which vary in length from 60 to 90 metres, are situated in public parks, sports complexes and recreation centres and come alive during the racing season, which covers the months from March to October.  The only purpose built track in Scotland is situated in Edinburgh at Redbraes Park in Leith, where the Edinburgh Falcons train and compete.

The sport was developed in the late forties under the influence of motorised speedway. The ensuing years have seen the image of cycle speedway change almost out of recognition although similarities with the motorised version still exist in so much that races take place in an anti-clockwise direction from a standing start on an oval shale covered track. Four riders race four laps in a sprint to reach the chequered flag which rarely takes longer than 50 seconds. The basic formula is similar to speedway but places the emphasis on the fitness and skill of its riders.

Team racing is the life blood of the sport and major leagues operate in regions of England, Wales and Scotland. Matches take place at weekends and in addition to regular team fixtures a number of club events such as four team tournaments, best pairs and individual competitions add variety to the racing calendar.

Bike handling, technical ability and physical fitness play an important part in the make up of a top rider. This can only be gained by experience and it is therefore not surprising that many of the top class competitors invited onto the open circuit are in their late twenties or early thirties. However, there is plenty of racing to be had for the younger riders. Most clubs promote age group competitions and senior members are always willing to lend a hand to the younger riders. 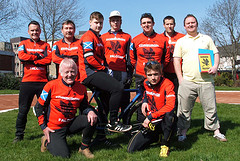 For more info go to the Edinburgh Falcons website www.edinburghfalcons.co.uk.