Article and Images by: Kate Cullen

A Scottish Women's Team rode the UCI Zeeland (Netherlands)Stage Race in June. Eileen Roe and Claire Thomas were riding for their teams so the Scottish Team was an opportunity to give new riders international race experience. 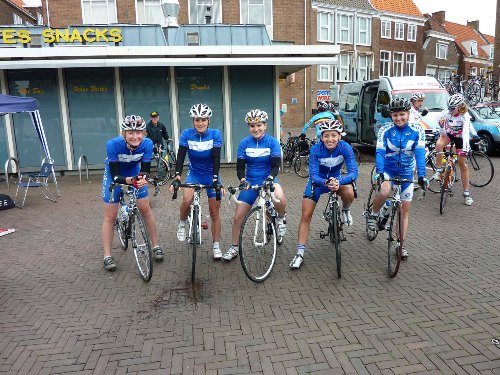 d of Jane Barr, Anne Ewing, Claire MacAulay , Laura Murray and Jenny Stanning. Apart from Jenny the team had been based in the Netherlands 2 weeks leading up to the race, where they raced in several crits - Claire MacAulay just missed a podium position in Germany with 4th place.
Jenny flew out the day before the race to meet the rest of the team.

The Zeeland Race consisted of 3 Stages: an evening 5km Prologue, a 105km stage on the second day and a 130km stage on the third day. As always the race was very windy making it very tough.

All the Scottish women gave 100%. Unfortunately Eileen who has been riding very well this year and was aiming for a good result had to retire from the race, due to injury.

Jane Barr's Race Report
I was looking forward to the Tour of Zeeland stage race as Dutch racing was starting to go well for me and I was definitely feeling more comfortable in the bunch and used to the Dutch way of racing. I had competed in this race last year so I knew what to expect and wanted to aim for top 50 in the general classification but I would have to work hard for this!

First stage was a 5km prologue in the town, with plenty of clinkers (Dutch cobbles) and corners; it was more like a criterium circuit so very technical. The whole team did well putting everything into getting as fast a time as possible and we were all through to the next stage.

Second stage was a 105km road race, the course was slightly different from last year's but the main objective was still the same, stay as close to the front as possible and try and stay out of trouble, along with the rest 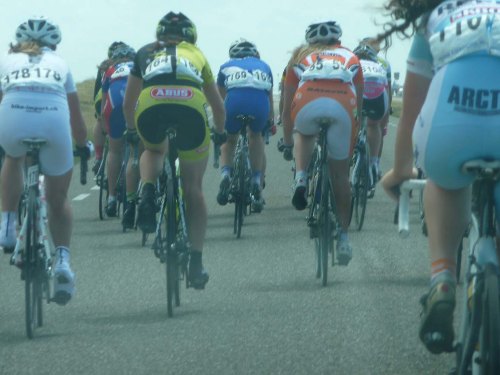 of the 180 riders in the bunch! This was a good day for me, I finished 36th overall and was really excited about the next stage, as top 50 was now a realistic goal.

Third and final stage was a 130km road stage. We all knew this was going to be a tough day as the wind had picked up and we had 4 finishing laps which had a 1km section on a dyke next to the sea, even more important to be near the front of the bunch. It was another good day for me even though the stage seemed to last for ages due to the strong wind.

Even though this is the 2nd time I have competed in this race it is still one of the toughest races I have done due to the level of racing and the weather conditions, I was definitely glad to get of my bike after the last stage! I was pleased with my overall performance, finishing 52nd overall, just 2 places outside of my. The whole team also put in a good performance.

Jenny Stanning's Race Report
The biggest field I've ever raced with previously was 60. So lining up
with 170 other girls was an education. It was a bit like a charity fun run
or sportive in that you stick your head up and all you can see are riders
stretching off into the distance. But there the similarity ends, because
instead of fancy dress or club kit, the riders next to you are wearing
national strips or kit you see on TV and in the cycling press. And of
course, you're hurtling along at breakneck speed trying to push towards the
front, while desperately trying to remember everything that was discussed
before the start.

I made it through the TT stage, learned all about resting, ate my body
weight in pasta and fruit loaf and started both road stage days. I learned
how to ride the cobbles, how not to ride in gusting cross winds (thanks
Anne) and how quickly the bunch splits. Although it was disappointing that
our group was pulled with a lap to go on the final stage, it did mean we
could cheer Jane over the finish line.

It was exhilarating, exhausting and absolutely fantastic. Thanks to
Scottish Cycling for one heck of a learning experience!