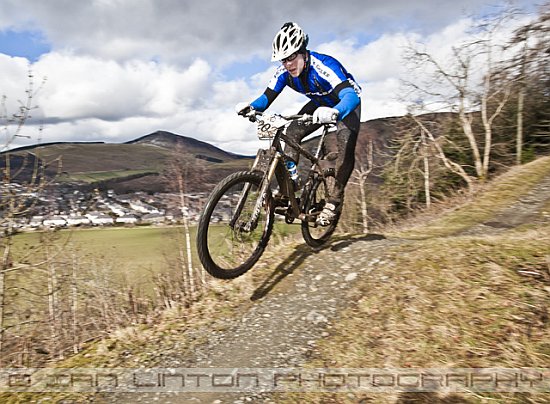 The Scottish race season was well and truly launched on sunday 13th March with the first event in the XC calendar, the mountain Time Trial at Innerleithen. Riders left the start at one minute intervals to tackle a challenging course which went up and down the hill several times, exploring some familiar parts of trail and riding down memory lane on some recently rediscovered sections.

The first battle to be decided was the series prize. This was the third race in a series of varied formats including an Enduro and a Mini Downhill, designed to test all round rider skills. John Young was leading the series in the Mens after the first two events, with Steven Larking right behind, in points and in the race order on sunday. After a gruelling test John came out ahead, and took the overall prize. Jac Marquis won the women's series prize.

The winner of the Vets race is awarded the Alistair Lees Memorial trophy, making this a popular event with Vet riders. This year the trophy was retained by former British Vet champion Iain Nimmo: "Adrenalin was stokin when I crossed the line, awesome loop. Thanks to everyone for a fantastic event.... so glad there's still someone willing to organize real biking."

Another battle was underway at the back of the field, with the current and former Scottish XC Champions Dave Henderson and Gareth Montgomerie setting out last. They rode in sight of each other for over an hour, with Gareth eventually prevailing and taking the win by a slim margin of 18 seconds, setting up the competition nicely. Lesley Ingram won the women's race, Hannah Ferguson the Junior women and Cameron Balfour the Junior men.

One last prize was contested, the King and Queen of the downhill timed on the last section of descent. This year the crowns went to Chris Herraghty and Lesley Ingram, showing her genuine all round skill to take both wins.

Thanks to everyone who took part in the series, and to i-Cycles of Innerleithen and Bike Trax of Edinburgh for continuing support with prizes and the trophy. The next event from Innerleithen Mountain Bike Racing will be the new Innerleithen Classic event, a 2 day Enduro taking place over the weekend of 28-29 May.

Check the website www.innerleithenmtbracing.com for results from that weekend and details of the upcoming Innerleithen Classic