Stirling Bike Club organised the first 'Battle of the Braes' Road Race on Saturday. The hilly 54 mile course began at Maclaren High School in Callander and headed south towards Thornhill, before turning towards Port of Menteith. At a hill by the Lake of Menteith, the first King of the Mountains points were contested, which were taken by John Kermode of Dundee Thistle. The mountains prize was sponsored by Scottish Woodlands. The race looped back around to Thornhill with several riders beginning to feel the pace on the short, sharp hill there. 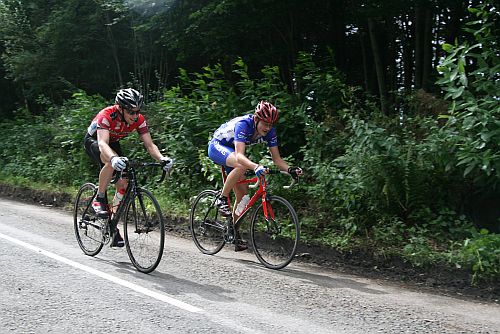 Then followed three very tough laps that took in the 'Mini Braes' and Braes of Greenock climbs. At the top of the Braes of Greenock, King of the Mountains points were awarded on lap 1 and 2. Several riders broke away from the bunch to contest this 'race within the race', which was won overall by Veli-Matti Raikkonen of Granite City Road Team, from Aberdeen.

On lap 3, Stuart MacGregor of Dooley's Cycles tried to break away from the bunch and to solo to victory but the difficult course made it tough for an individual to stay away and he was caught. Alistair McNicol and Andy Matheson counter-attacked and only just stayed in front of the peloton until the finish, where McNicol won the sprint by less than half a wheel. The marauding bunch were right on their tails though, and had the race been 200m longer the top three places might have looked very different. As it was, veteran John Kermode took 3rd. 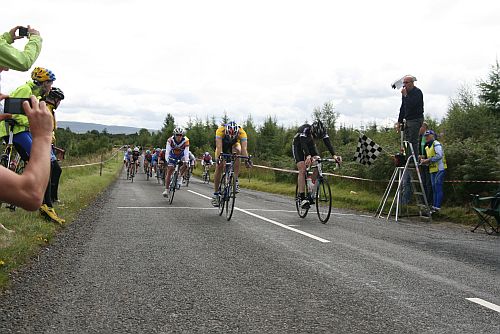 The race was a resounding success and organiser Eddie Cowle is already looking forward to staging the event next year.

Full results from the race can be seen here (Excel)