In her first season of racing, Katie Archibold has won the British female pursuit title, beating national, European and World road champion Lucy Garner into silver along the way.

Having never ridden a pursuit before, Katie had no idea what sort of time she might post and was even worried she may be caught by some of the girls in the qualifying round!

Scribbling down a schedule of 2 minutes 35 seconds as a guide, Katie took to the line.

What followed was quite amazing stuff, as she set off with an average opening lap of 23.9 seconds and then settled down into 18 second laps only varying by the odd tenth of a second to finish in 3:30.3 and record the quickest qualifier of the day, four seconds quicker than Lucy Garner.

In the final, Lucy garner had decided to start as fast as she could in the hope that she could get a quick catch on Katie or panic her into riding to hard to early. Garner gained five seconds on Katie over the first 4 laps, but Katie didn’t panic and kept her pace solid at 18 second laps with just one increasing to 17.5. Garner couldn’t hold this pace and started to fade. Katie then began to reel her back in, eventually finishing five seconds ahead of the world champion.

First gold of the championships for Scotland went to Tom Arnstein of Spokes RT. In an event which was not Toms main focus, the win came as a welcome surprise.

Tom had been targeting the pursuit this year and with the many hours spent practicing coming out of the start gate and getting up to speed as quick as possible, Tom had turned himself into a contender for the Kilo title.

Angus Gillies from The Bicycleworks.com also competed and finished in an excellent 7th place, just 1.8 seconds down on Tom. 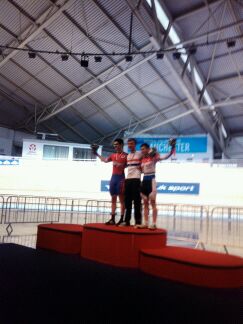 Stuart Balfour and Hamish Carrick from the Edinburgh RC competed in this event and both put in qualifying rides with Stuart posting 2:30.9 for the 2km effort and Hamish 2:33.6. Not quite quick enough to progress through to the next round, but a fine effort considering how little track time has been available to them in their build up.

Scotlands only competitor in this event was Edinburgh RC’s Lulu Bartlett. Lulu who is only a youth B rider, put in a gutsy performance against the older riders and posted a respectable time of 2:52.5 for the 2km effort.

Emma Borthwick and Katie Archibold took to the track for this race with a remarkable Silver for Scotland from Katie, Edinburgh Racers. Katie who is in her first season shocked everyone with her aggressive riding. With reigning National, European and World road champion Lucy Garner on the track, it was always going to be a tough race.

The first two sprints went as expected with Garner, Emily Kay and Amy Hill battling it out. Then, with 38 laps to go, Katie Archibold went away on her own. She was half a lap up with 30 to go and took Sprint three with Garner, Kay and Hill taking the sprint for the remaining points. Hill still led by 2 from Garner but there was no real effort to bring Katie back. Alice Barnes of Twenty3c.co.uk Orbea bridged the gap to Katie and the two worked well together for a while. Katie pipped Barnes on the line to take sprint 5 with Garner and Hill taking the rest of the points. Katie’s hard work was paying off as she was now tied with Hill for the lead.

The race came together after Katie took the penultimate sprint from Garner, Hill and Kay. Katie now led on 15 points with Garner and Hill tied in second on 12. All Katie needed to do was finish third in the final sprint and the title was hers. And she was away again. This time, though, she hadn’t quite got the timing right – or the energy left. After a courageous ride that had won her the admiration of the crowd, she couldn’t quite hold off the fast moving bunch that were now going full speed to catch her before the line. Garner took the final sprint and with it the title and Katie took a well deserved Silver medal.

Peebles CC’s Flora Gillies took to the track for this discipline which Flora admits to being her least favourite event. Flora put up a respectable ride in the qualifying timed ride. Flora put in some excellent performances in the sprint rounds earning herself a respectable 13th place overall.

Hamish Carrick, Stuart Balfour and Sean Noon took part in this event. Stuart and Sean took to the track in heat one of the qualifiers. With twelve riders going through, the main aim was just to get some points in one of the sprints which would make it pretty much certain qualification for the final. Sean set out on the first sprint to achieve this and succeeded with a blistering effort. Points secured, he could now sit back and relax a little. Stuart kept the excitement levels up for the coaches watching by deciding to take his points on the last lap. Hamish went in heat two and set out to emulate his team mates. Leaving it till the last sprint, Hamish unfortunately found himself boxed in and this time had to miss out on a place in the final. In the final both Stuart and Sean rode well, both holding their own, but not quite being able to beat the countries top riders with Sean finishing 18th and Stuart 22nd.

Mark Stewart (Spokes RT), Angus Gillies (Bicycleworks) and Tom Arnstein competed in this event. All three progressed through their heats and into the final with relative ease. The final was run off at a frantic pace with no let up in the attacks. Mark Stewart in particular was very active and determined to try and get in a move and give the bunch the slip. Two riders eventually gave the bunch the slip and ended up lapping the field. In the final sprint for the line, Marl finished 14th, Angus 17th, and Tom 19th.

Flora rode really well in the scratch, constantly featuring at the front of the race, but just narrowly missed out on qualifying for the final by one place. The keiran which is always an exciting event, lived up to its reputation with some fast and furious racing by the countries top juniors.

Angus lined up for the heat of his favourite event with high hopes. In an event where positions change constantly, you have to stay alert all the time. Angus rode his heat text book holding off all challengers trying to come over him to qualify straight to the semi final.

Mark took to the line but was struggling from the the effects of a crash he had after crossing the line after yesterdays scratch race. In the semi’s Angus was up against stiffer opposition and try as he might he couldn’t quite hold off the specialist sprinters and found himself boxed in at the bottom of the track coming into the home straight. A good effort from Angus, eventually finishing 12th overall.

Tom Arnstein and Mark Stewart took to the start line for this event. Mark was the first of the Scots to go in heat 4 of the qualifiers, posting the quickest time so far of 3:38.9, eventually earning him 13th quickest.

Tom was facing the mighty Jake Reagan in his qualifier. A good steady start from Tom, but not what he’d been doing in training. Stuggling to lift the pace, it was just going to be one of those days and Tom had to settle for 10th quickest time of 3:34.3 for the 3km.

Hamish Carrick, Stuart Balfour and Sean Noon again took to the track. With three separate heats of 18/19 riders and only eight qualifying, a tough task lay ahead. Unfortunately Sean was the only Scot to qualify with a fine 4th place in his heat. Hamish and Stuart came so close with both of them finishing 9th in their heats. Stuart finally had to concede to the cold that he had been fighting all week.

Another fine effort from Flora Gillies who decide her best tactic was to attack the field. Making her bid for freedom about halfway, Flora rode super hard, but couldn’t hold off the super fast bunch.

Matthias Barnet competed in the boys event and Lulu Bartlett and Emma Borthwick in the girls competition. The multi discipline event was of a particularly high standard this year and our riders held their own in all the events finishing in the middle of the field. Final placings have still yet to be published.