Rapha Condor Sharp made in two years in a row when Christopher Jennings of South Africa soloed across finish line of the 47th South Carrick David Bell Memorial.  A frantic last lap of a fifteen mile circuit around the Byne climb decimated what had been a leading group of ten down to five at the end of a fantastic day’s racing around the hill roads of South Carrick.

Now a National A event, the South Carrick David Bell Memorial is the biggest day-race in Scotland and despite the late scheduling clash with the Smithfield Nocture in London, attracted the strongest calibre field in the event’s history.

The action kicked off in Girvan at 11am with local schoolchildren William Ratchford and Megan Crowhurst waving the riders off accompanied by a piper.  With just seven miles before the first spring at Dailly the Scottish teams seized the initiative and got a quick gap opened up off the front, with Peter Murdoch of

prizes and points on offer to 20th place.  The final GPM of the day at the Screws saw Gilham take top honours for the William Grants and Son’s King of the Mountains.

And so began the first of two tactically played laps of the Byne circuit.  Heavily outnumbered, Greenwood of Vanilla Bikes put in a number of efforts to whittle the group down to five who had established a lead of over 1min by the last lap.  Sadly for Greenwood both Rapha Condor Sharp and Herbalife Leisure Lakes had two men.  Racing down the Assle Valley, never dropping below 30mph, Christopher Jennings was able to break clear and entered the final circuit of Victory Park with a clear view behind.  A very hotly contested sprint for second was just rewards for Ben Greenwood who animated the race so much.  Richard Handley trailed home King of the Mountain winner Kit Gilham who took 3rd.

Meanwhile the anxious Girvan crowd waited with baited breath for the remains of the peloton containing local riders Mark Skilling and Kenny Armstrong, both vying for the host clubs ‘Davie Bell RR trophy’.  A huge cheer went up the finish straight as the bunch sprinted for the line, Skilling just pipping Armstrong.

Having doused his opponents in Champagne on the finish podium, victor Christopher Jennings was very gracious in his speech, praising the level of the racing and his opponents, and thanking the Girvan crowd for the great hospitality and sunshine! 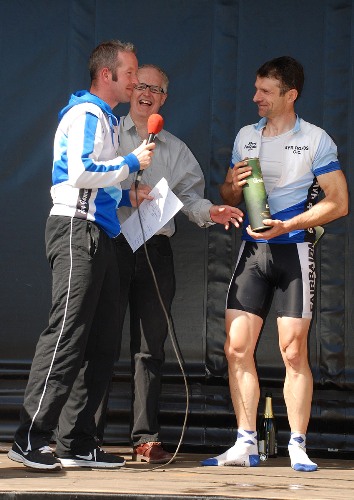 And so concluded a fantastic weekend of cycling in Girvan, with more than 100 amateurs completing the 100km Highwayman Challenge on Saturday, nearly 80 volunteers aiding the passage of the race on Sunday, and close to £1,000 raised for MS Society Scotland.

Organiser Christopher Johnson praised the support host club Ayr Roads CC had received for the event.  “It is thanks to our local sponsors and community that we’ve achieved what we have – South Ayrshire Council and South Carrick Community Leisure have given us fantastic help all along the way.  We’ve seen the employees of William Grants & Sons go above the call of duty, taking to their bikes en masse yesterday in the Highwayman Audax and assisting all day today.  It’s incredibly humbling to see the work and commitment put into our event, and we thank the racers for putting on such a great spectacle”.

Ayr Roads Cycling Club are currently bidding for Premier Calendar status in 2013.  A full race highlights video prepared by Eventfilms.org.uk will be released later in the month.