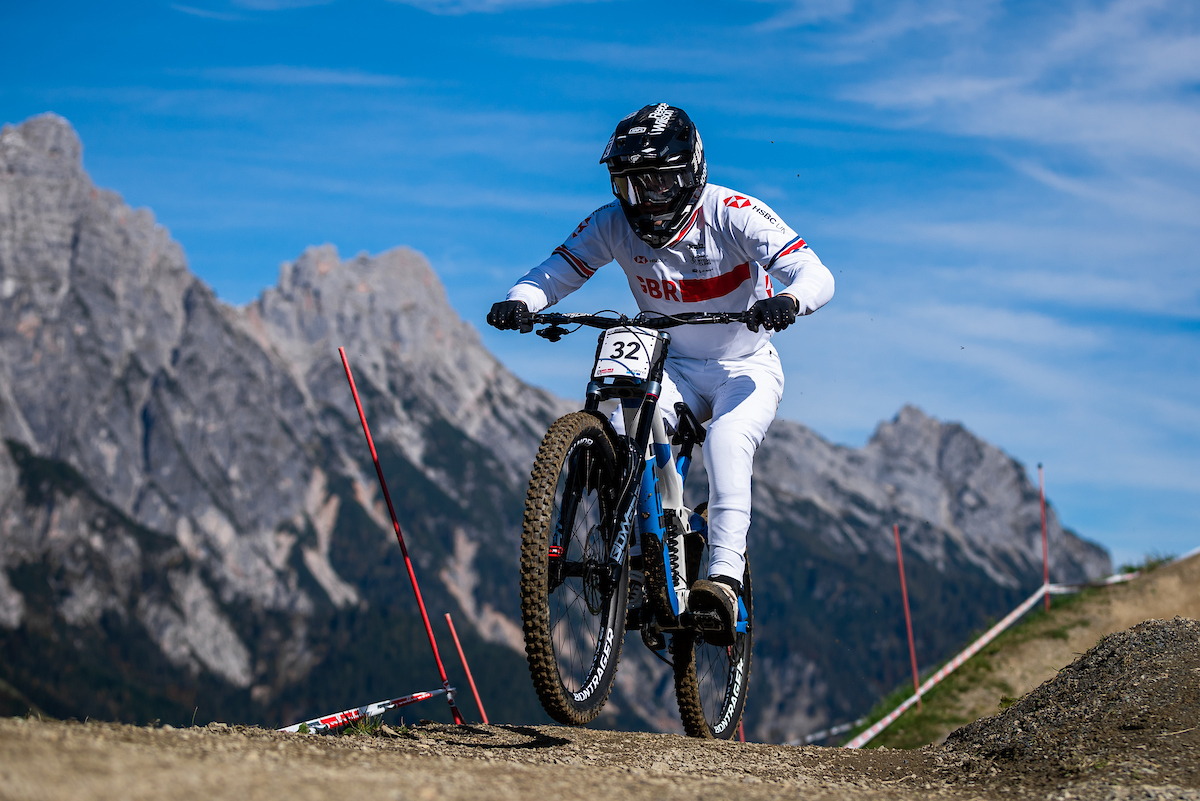 The UCI Mountain Bike World Championships in Saalfelden Leogang delivered an amazing weekend of racing and plenty of results for the Scottish riders representing the Great Britain Cycling Team in both XC MTB and Downhill.

The Great Britain Cycling Team for the cross-country team relay event at the UCI Mountain Bike World Championships was dominated by Scottish names - Sean Flynn, Corran Carrick-Anderson, Isla Short and Elena McGorum were among the riders in action on the six-lap race. This was the youngest team Great Britain has ever entered into a world championship team relay event but certainly brimming with talent.

Sean took on the first lap, crossing the line in sixth place and handing over to junior rider Corran who put in a mature ride and delivered brilliantly on the descents, given the horrendous weather conditions.

Isla was next to take on the course, making her debut as an elite female rider at world championship level, and did a good job to hand over to Elena McGorum in eighth place.

Elena, a first year junior, slipped back slightly against some tough competition, handing over to Hattie who battled back to bring the gap to the front down.

Frazer took on the last lap to build on the progress Hattie had made, and further closed the gap to cross the line in fifth place with a time of 1:30.38 just 15 seconds off the fourth placed USA team.

It was a good battle for the podium places, with France emerging as the victorious team in a time of 1:27.34. Italy finished in second place, with Switzerland in third.

The muddy conditions continued into the second day of racing which tested all riders competing in the junior races but didn't impact our hardy Scots. Anna Flynn and Elena McGorum both rode strong races to take 24th and 30th respectively in the junior womens race. While Corran Carrick-Anderson snuck into the top 20 and Rory McQuire took 32nd.

Peebles born Isla Short had the ride of her life in the elite women’s race, finishing in a career best fifth place. Starting the race from 19th on the grid, Isla made her way into the top ten riders within the starting loop and from there she worked her way through the field, finishing lap two in fifth position, despite sliding off during the descent on lap one. Isla held on to fifth position for the rest of the race, crossing the line 3 minutes and 57 seconds after the winner of the race, Pauline Ferrand Prevot from France.

Speaking after the race, Isla said: “When you have a good race, you aren’t even thinking, you’re in autopilot and making the right decisions. I knew I was having a really good race so I didn’t let myself think about it. I was really sensible on the climbs and I paced everything really well. I’m in shock.

Earlier in the day, Loana Lecomte from France who won the under-23 womens race. Anna McGorum came in 22nd place.

The final day of racing at the UCI MTB World Championships was dominated by the downhillers. In the women’s race, Fort William born Mikayla Parton was Great Britain’s highest placed finisher in an impressive fifth place, 23.164 seconds behind the victorious Camille Balanche from Switzerland. Myriam Nicole from France and Monika Hrastnik from Slovenia completed the podium, winning the silver and bronze medals.

The elite men’s race brought the weekend to a close in style as Reece Wilson was crowned downhill world champion. Wilson’s smooth, stylish ride saw him post a time of 3:51.243 and take to the hot seat early on in the competition, where he had a tense wait to see whether any of the 31 remaining competitors could beat his time. When the final rider, defending champion Loic Bruni, crashed on his run, the victory was sealed for Reece and the Scottish rider took the rainbow jersey.

Upon learning of his victory, an emotional Reece said: “I don’t know what went right this weekend, I was ready for it to be wet or dry… I just believed in myself. I needed a year off, I used it productively and I came here and I believed I could be the guy who could win. And now that I’m here, I can’t believe it! I’ve worked really hard, and yeh – here we are.”

Greg Williamson also finished in seventh place rounding off an exceptional weekend of racing for the Scottish riders on the Great Britain Cycling Team.