The girls showed the boys the way in round 3 of the South West Scotland Cycling Project (SWSCP) crit series held on Sunday 24th June at the Crichton campus, Dumfries.

By far the stars of the day were the girls taking part in the Youth C race. Within the first 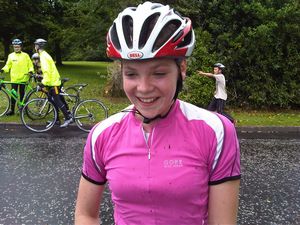 few laps a group of four riders got established containing Ellie Park (Glasgow Riderz), Ben Docherty (Glasgow Riderz), Max Bloor (ERC) an local boy William McCartney (Annan Youth CC). The group worked well together, sharing the pace setting. Behind though, the other girls were not giving up with locals Laurie Adamson (Hardrock CC), Polly Henderson (Stewartry Wheelers), Anna Shackley (Glasgow Riderz) and Annan McGorum (Peebles CC) working hard together along with the help of a couple of the boys.

Whilst the group out front continued to work well together, even when McCartney punctured and regained the group after a wheel change and a lap out, the chasers behind started to splinter under the strain. Laurie Adamson then spent more the last half of the race chasing alone and at one point coming with 15 seconds of the chasers.

Meanwhile, upfront with 2 laps to go, Ellie park attacked up the slight in 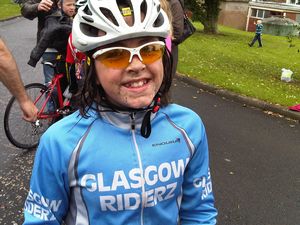 cline past the finish line. With aggression to match a mad Belgian attacking in Flanders, Ellie took off from the group and quickly opened a gap. Time

Trialling to the finish with determination, Ellie crossed the line alone alone for a fine solo win. The remaining three started to split under the pressure and coming up the finish straight Laurie managed to overhaul William McCartney and

almost got the other two.