Young people today unveiled the bold vision behind Glasgow’s bid to host the 2018 Youth Olympic Games, launching the ‘Be a Champion in Your Life’ campaign with a spectacular show.

In a world-first, Glasgow’s candidature for the 2018 Youth Olympic Games was launched in style by young people at the iconic Kelvingrove Art Gallery and Museum. Using a range of sporting and cultural performances the team showcased the very best Glasgow, Scotland and the United Kingdom have to offer. Young sports stars joined members of the Scottish Youth Theatre and other performers to unveil details of Glasgow’s Bid. 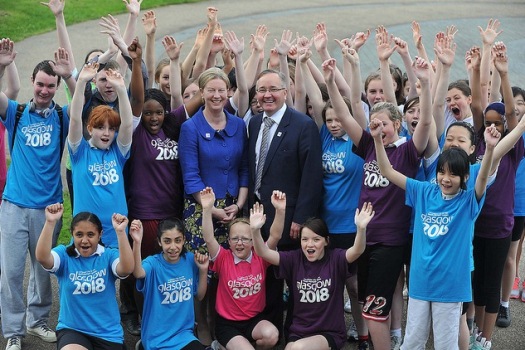 Dame Kelly Holmes, double Olympic gold medallist, joined the young people to back Glasgow’s Bid and talk about her own personal champion moments.

Glasgow 2018 is seeking to capitalise on the opportunities created by the London 2012 Olympic and Paralympic Games and the Glasgow 2014 Commonwealth Games, as well as the city’s ongoing international sporting events programme. Glasgow 2018 would be a tangible legacy for these major events, and a powerful catalyst for the next phase in the UK’s journey with the Olympic Movement by empowering young people to become champions in their lives.

The Bid is a strong partnership between the Scottish Government, Glasgow City Council and the British Olympic Association (BOA) and has the full and active support of government at all levels. Young people have already played a vital role in the development of the ‘Be a Champion in Your Life’ campaign. As well as leading the launch celebrations, they were central to the creation of the ‘Glasgow 2018’ word mark. Senior figures from each major stakeholder were also present at the launch.

Glasgow’s bold vision builds on the legacy already achieved through London 2012 as well as plans for the 2014 Commonwealth Games, and aims to add to these hand in hand with the Olympic Movement. Glasgow is already home to the largest youth employability scheme of its kind in the UK, the Commonwealth Apprenticeship Initiative, which has placed more than 2,000 young people in training. And through its twinning programme Glasgow has linked every school in the city with young people in every region of the Commonwealth.

The Leader of Glasgow City Council, Councillor Gordon Matheson, said: “Glasgow is already known the world over as a great sporting city because of our proud track record of hosting international events and investing in world-class sports infrastructure. Hosting the 2018 Youth Olympic Games would be a new success story for our city and one that we are determined to capitalise on.

“Young people are at the very heart of our Bid and will be our strongest voice as we go all out to bring the Youth Olympic Games to these shores for the first time. A successful campaign would continue the legacy created by the London 2012 Olympic Games and Glasgow 2014 Commonwealth Games, helping us continue to work hard together with young people to help them build the bright future they deserve.”

Minister for Commonwealth Games and Sport, Shona Robison, said: “The official launch of Glasgow’s bid to host the 2018 Youth Olympic Games showcases the best creative and sporting talent from Glasgow, Scotland and the UK and brings the city’s vision for 2018 to life. Today’s launch is unique in being hosted and delivered entirely by young people – they are at the very heart of Glasgow’s vision.

“The Youth Olympic Games will provide young athletes with the opportunity to compete at the top of their field, acting as an inspiration for young people throughout the world. Hosting the Youth Olympic Games is an exciting prospect for Glasgow and Scotland and we are delighted to be working with Glasgow City Council and the BOA on a bid that will build on the legacy created by London 2012 and the 2014 Commonwealth Games.”

Chairman of the BOA, Lord Moynihan, said: “To be given the privilege of hosting the 2018 Youth Olympic Games would be an immense honour for Glasgow, Scotland and the UK. It would permit all of us from sport, culture and education to ensure that the strong youth legacy of the London 2012 Olympic Games and the Glasgow 2014 Commonwealth Games could continue to enrich the lives of young people, encouraging them to always aim for their personal best.

“Glasgow's track record of hosting international sporting events as well as its passion and commitment to young people make it an excellent host city for the young athletes of the world as they strive towards their own personal Olympic dreams."

Double Olympic Games gold medallist Dame Kelly Homes said: “Any athlete who’s ever competed in Glasgow will tell you – this is a very special sports city. A Youth Olympics here would be an incredible way to kick-start the careers of the next generation of young athletes. They’ve got world-class facilities, a great history of hosting top sports events, and some of the most passionate fans on the planet. Glasgow 2018 is in a great position to make a real contribution to the future of the Olympic Movement.”

The UK Minister for Sport and the Olympics, Hugh Robertson, said: “I fully support the Glasgow bid for the 2018 Youth Olympic Games. I can think of no better legacy from the London 2012 Olympics and Paralympics and the Glasgow 2014 Commonwealth Games, and no better city, given its world class venues and sporting enthusiasm, in which to stage this prestigious event.”

The foundations are in place, but now we need your support.  Here is how you can keep in touch with all the lastest Bid news and get involved in Glasgow 2018 events near you: