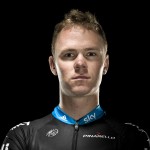 Team Sky's Chris Froome produced the time trial performance of his life to take the leader's red jersey at the Vuelta a Espana.

The Kenyan-born Briton finished second on the stage behind Tony Martin (HTC-Highroad) in the 47 kilometres time trial around Salamanca and it was good enough to see him vault up from 14th to top of the overall standings.

He leads by 12 seconds from Jakob Fuglsang (Leopard-Trek), with Team Sky team-mate Bradley Wiggins third on the day and up to third overall, 20 seconds behind Froome.

Wiggins and Froome had put themselves in contention with superb rides the day before when they finished fourth and fifth respectively on the climb to La Covatilla, taking time out of most of their general classification rivals.

And all eyes were then on Wiggins 24 hours later when he went fastest at the first intermediate time check after 13.3km, one second ahead of Martin who had earlier gone on to set the target time of 55 minutes and 54 seconds.

However Wiggins was 19 seconds behind Martin at the second check and in the third phase of the route it was Froome, who had started four minutes ahead of Wiggins, who suddenly came to the fore.

Froome crossed the line just 59 seconds behind Martin in second place and when Wiggins arrived at the finish he was a further 23 seconds back.

None of the late starters threatened those three at the top of the day's standings and it all led to a huge shake-up on the GC. Fuglsang splits the Team Sky duo while defending champion Vincenzo Nibali (Liquigas) is 31 seconds back in fourth.

But the likes of Joaquim Rodríguez (Katusha), who had started the day just one second off the lead, dropped right down the standings after finishing more than five minutes back.

It all left Froome stunned by the scale of his achievement as he said: "I'm over the moon, I can't believe I've gone into the leader's jersey.

"I really wasn't expecting that today - I went out there just to have a good solid ride and stay in contention with the overall leaders.

"But I think I just had a fantastic day and somehow I've ended up in the leader's jersey - it's a dream come true."