Stannard Breaks Through in Austria 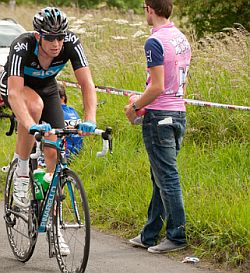 Sky's Ian Stannard will be forgiven for mixed feelings on the day of his breakthrough opening win as a professional. Having initiated a breakaway that eventually grew to five riders, Stannard out-sprinted his companions to win stage 5 of the Österreich-Rundfahr, a 157km run from St. Johann/Alpendorf to Schladming.

On any other day, it would have been the stand out ride, but Edvald Boasson Hagen's first stage win in the Tour de France, on the other side of Europe will have stolen some of Stannard's thunder.

Not that Stannard will be bothered -  a double win for the team, which has shown much greater maturity during this, its second season, will be twice a sweet for all concerned.

Behind 24 year old Stannard, Gatis Smukulis (HTC-Highroad) and Stefan Denifl (Leopard Trek) took second and third, whilst the main field came in 49 seconds later - the break's lead had been three minutes at one point on the stage.