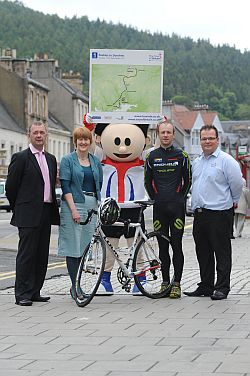 The Scottish Borders and Dumfries and Galloway will be the perfect stage for two major cycling events this September, when The Tour of Britain and the accompanying Prostate Cancer Charity Tour Ride Scotland take place.

The route for Stage One of The Tour of Britain will see almost 100 of the world's top cyclists racing the 170 kilometres from Peebles to Dumfries through the stunning scenery of the Scottish Borders and Dumfries and Galloway on Sunday 11th September. Spectators in Dumfries will be the first anywhere to see the new IG Markets Gold Jersey awarded to The Tour's overall race leader after Stage One.

A week before The Tour of Britain returns to Scotland amateur cyclists will have the chance to test out the route in The Prostate Cancer Charity Tour Ride Scotland on Sunday 4th September. Over 1,000 cyclists are expected to take up the opportunity to sample the route and raise money to help combat prostate cancer.

The two events were jointly launched in Peebles today as a part of the TweedLove cycling festival. EventScotland’s Chief Operating Officer, Paul Bush said, “Cycling continues to boom across the country and we are looking forward to welcoming the Grand Depart of the 2011 Tour of Britain as one of our marquee events on Scotland’s cycling calendar this year. “In the year of Active Scotland, the Tour Ride gives everyone the opportunity to experience the challenges that the professionals will face on some of Scotland’s most scenic roads.

The media coverage generated from both events will further enhance Scotland as the perfect stage for events and hopefully attract visitors from far and wide to come and experience cycling in Scotland for themselves.”

"We are delighted to be bringing The Tour of Britain back to Scotland," said Hugh Roberts, Chief Executive of organisers SweetSpot Group. "It is fitting that the Grand Depart of the 2011 Tour will be in Peebles, a town with a rich cycling culture and one that has welcomed The Tour of Britain before.

The route of Stage One of The Tour of Britain will begin in the centre of Peebles before heading along the Tweed Valley to Innerleithen. From here the climbing begins, taking the race over a series of climbs to Tweedsmuir and then on to Moffat. After hitting Dumfries for the first time Stage One will take in a loop of the Dumfries and Galloway countryside, before turning for home and the finish line in the centre of Dumfries.

Three intermediate Yodel Sprints on the road to Dumfries will see riders battling it out for the right to wear the highly distinctive and new-for-2011 Yodel Sprints Jersey. Spectators will see the peloton in full flight competing for points and vital bonus seconds at Innerleithen, Moffat and on the first passage of the finish line in Dumfries. The highly popular King of the Mountains competition also returns, with Category Three climbs at Fan's Law, Devil's Beef Tub and Auchenhay Hill, giving the climbers the chance to entertain Scottish spectators.

Councillor Vicky Davidson, Executive Member for Economic Development, Scottish Borders Council, said: “We are very excited about hosting the Grand Depart of The Tour as well as The Prostate Cancer Charity Tour Ride and in the build up to September we are maximising awareness that both these fantastic events are coming to Peebles and the surrounding area. We have been meeting with local businesses and groups to ensure that they are ready to benefit from the cycling spotlight being on the Scottish Borders. We are delighted to welcome thousands of participants for The Tour Ride the preceding Sunday along with the professionals. Even more visitors will see for themselves that the area is genuinely a spectacular destination for cycling. “

Councillor Carruthers for Dumfries and Galloway said, "Dumfries and Galloway Council is delighted to re-establish its excellent relationship with The Tour of Britain to welcome the Scottish Stage to our region and promote cycling through this international event. We are thrilled to be part of The Tour on day one this year.

“The Stage Finish at Whitesands, Dumfries will be the place to be for all sports fans on the 11 September."

The Prostate Cancer Charity Tour Ride Scotland takes place on Sunday 4th September, with a choice of ride distances. Cyclists wanting to replicate the entire stage can take on the 170 kilometre Pro Ride from Peebles to Dumfries, while a 70 kilometre Challenge Ride, starting and finishing in Dumfries is also available.

To find out more about both rides and for details on how to sign-up and begin raising money for The Prostate Cancer Charity, go to www.tourride.co.uk