A bright sunny day, but strong, ever changing cross winds greeted the riders at the start of the North East Regional Road Race Championships on Sunday. A late course change due to road works (a similar thing had forced the postponement of the Yorkshire Championships) meant the race was run over a circuit taking in Middleton Bank, Meldon and Hartburn. The Elite, 1st, 2nd, 3rd & 4th category race covered the 13.33 mile circuit six times for an 80 mile race distance. The Masters and Juniors two laps less for a 53 mile race and the Women did three laps for a 40 mile distance. 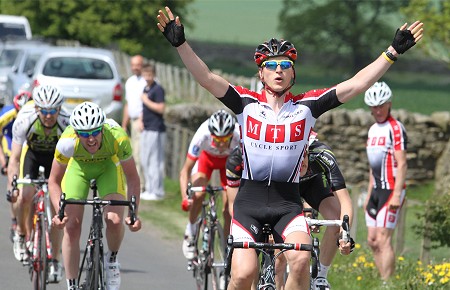 In the main race, the first lap was largely uneventful with a few riders trying unsuccessfully to break clear, including Elite James Moss of Endura Racing, as the race headed into Hartburn. However, on the second circuit, Moss, together with circa 14 other riders including fellow elite riders Matt Kipling of MTS Cyclesport CRT/ Inkland, Ian Taylor of Team Bglobal and Colin Humphrey of Team Sportscover, did manage to break clear and stay away for the whole race. The remaining peloton soon split into two, producing three distinct groups on the road.

As the lead group ran down the miles, any attempted break was soon brought back forcing the inevitable bunch finish. As they came over Middleton Bank for the last time, it was still all to play for with at least a dozen riders in with a shout. Along the final stretch, class showed and Matt Kipling came out of the pack to take the spoils closely followed by James Moss and Simon Baxter. 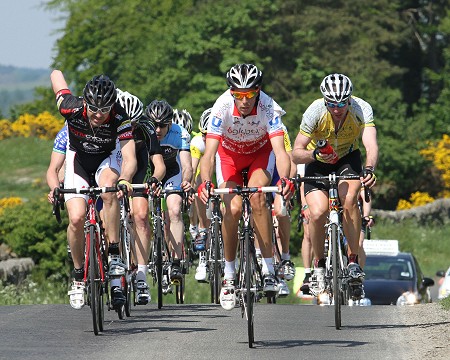 As is customary, the Vets, Juniors and Women were all sent out together. However the selection was quickly made when on the first full circuit, Vet Chris Bush of VC St Raphael attacked on Middleton Bank with such power that only fellow Vet, Neil Baxter of Active Cycles Fentimans RT could get on his wheel. These two rode away from the peloton at an amazing rate, leaving the Juniors to their own race.

By the end, the vets were at least 10 minutes ahead of the young guns with Neil Baxter taking a comfortable sprint victory from Chris Bush. Martin Hopkinson, who had ridden almost the entire race alone in between the two leaders and the bunch, came in for third.  The Junior result was a much closer affair with Jordan Matthews of Hetton Hawks winning the bunch gallop from Matthew Woods of Adept Precision/North East Health and Callum Grieve of Stockton Wheelers.

There were only four starters in the Women’s race and Sarah Murray, a private member and Lindy Edwards of Gosforth RC rode the whole race together and alone, with Lindy showing her experience to take the sprint from Sarah. Anselma Gallinat of VC St Raphael came in third.

More Photos from Andy May 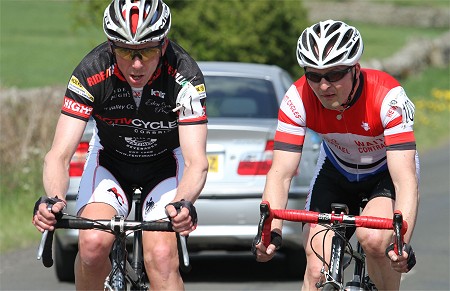 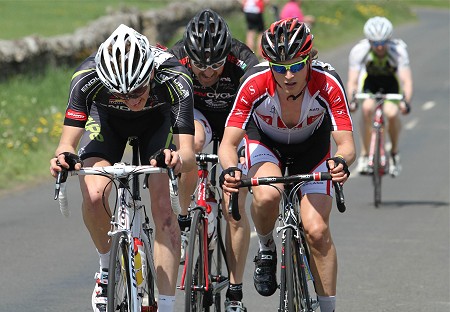 James Moss of Endura giving it his all at the front of the break. 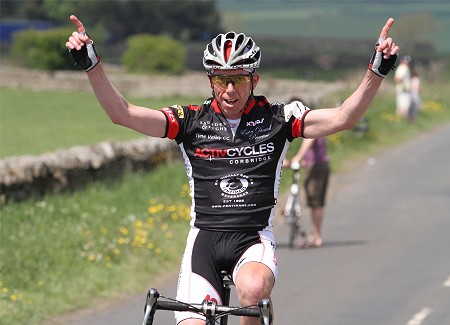 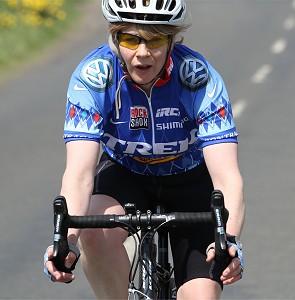 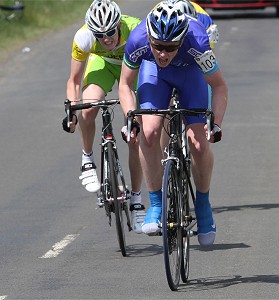 Left: Lindy Edwards and right, the sprint or the Junior title won by Jordan Matthews.