I’m going to start by congratulating all our medal winners form the recent Paracycling World Championships. Once again a series of brilliant performances, which you can elsewhere on this website. It really is fantastic to see.

And what a brilliant start to the season by our elite road riders too – wins galore, and not just from Team Sky, but also from British riders who have come through all or part of our Programme, or indeed have found their own way to success – we have never said there was only one route to the top, and I am happy to congratulate all of them – it’s a tough sport and if you can make it through in your own way, then good luck, I say.

Now for a little bit of comment on a controversial matter. This last week saw the long awaited outcome of the Contador case. Not many of you will want to read all of the 93 pages of the CAS judgement on their website, but if you do have the time and energy, I’d thoroughly recommend it as a good, if challenging, read.

I know everyone, me included, feels the matter should have been resolved quickly, but this really was a complicated case, made more so by the complicated legal machinery.

You perhaps won’t be surprised to hear that I am fully supportive of the UCI/WADA case and am pleased at the outcome. I’m not going to comment on any of the detail of the judgement, except that for me the whole thing is summed up by something that most reports seem to have missed, perhaps because although it’s noted in the judgement, the matter was not considered relevant by the CAS panel. Here are a couple of very telling extracts. If you read nothing else, bear with me and have a look at these.

As part of his defence, Contador made this statement;

WADA responded to this;

"In its appeal brief WADA presented a list of 12 former or current team-mates of Mr
Contador who have been banned for doping and states that criminal investigations are
pending against the Astana Team and the Athlete’s former team manager, Mr Manolo Saiz,
while in the “Puerto” criminal investigations, initials corresponding to those of Mr
Contador were found in certain handwritten documents of Dr Fuentes and Mr Jörg Jaksche
testified accordingly in his own doping case. Finally, Mr Contador’s current team manager,
Mr Bjarne Riis admitted to having used performance-enhancing drugs during his career.

"WADA does not argue that these alleged facts are sufficient in themselves to establish that
Mr Contador should be sanctioned for an anti-doping rule violation. However, according to
WADA, the tainted environment in which the Athlete lives, enhances the likelihood that
the source of the adverse analytical finding is doping rather than a contaminated piece of
meat. Furthermore, these facts contradict the statement of the Athlete who misleadingly
claims that he has always been surrounded by “people (cyclists, doctors, trainers, etc.)
who categorically reject the use of doping substances”. The statement of Mr Contador,
claiming that he does not know the highly controversial Dr Fuentes is also undermined by
the admissions of his former team-mate Mr Jörg Jaksche."

Contador’s legal team contended that “guilt by association” was not something that should be considered by CAS. The CAS panel agreed. Maybe they were right but, leaving aside the first sentence where Contador claims he has never taken doping substances, I have to say I find it absolutely amazing that Contador could keep a straight face and continue to say that he had “always surrounded himself with people who categorically reject the use of doping substances”.

Really, Alberto? When you look at your previous and current team managers? When you consider that 12 of your current or former teammates have been sanctioned for doping offences? You have really “always surrounded yourself with people who categorically reject doping”? You want me to believe you are innocent and you make a statement like that? That really is literally incredible, in my opinion.

As I said, though not considered relevant by CAS, it seems to me to sum up the entire situation. I leave readers of this blog to make their own minds up. Let me know what you think.

It’s been another incredibly busy couple of weeks for me, but I promised I’d try and keep everyone up to date through my blog, so here’s another snapshot.

This is already proving to be an incredibly busy and important year, and it’s going to continue that way, for all the reasons of which you are no doubt aware. However, apart from the usual sporting issues, I’m very pleased that we are now beginning to develop a major role in looking after the more general interests of cyclists in terms of our place on the roads, and related issues of safety and respect. Traditionally, we have left such things to other bodies, but that is changing now. If we are to develop our sport and our role in representing more and more cyclists, then it is clear that we have to start mobilising the resources and reputation that we now have, on such matters.

Hopefully, you will have seen reports on these things on our website, in the media (for example the campaign run by The Times), and most recently in the open letter that I have sent to the candidates for the Mayor of London election. We’ll keep you posted on the reactions to all these things via the website, of course.

Elsewhere, I seem to have spent a great deal of time on aeroplanes recently, going backwards and forward for UCI meetings. Again, for those who don’t know, I was elected to the UCI Management Committee two years ago, and last September was asked by the President Pat McQuaid to take on the role of President of the UCI Road Commission.

At the end of January I was in Koksijde, Belgium, for a meeting of the UCI Management Committee. The business covered included awarding of World Championships in various disciplines to towns and cities around the world, approving calendars, receiving minutes of the various Commissions looking at each specialised part of the sport, and receiving reports about the sadly numerous doping cases that are ongoing. Certain of those have progressed since then, and I was going to say a bit more about some of them, but frankly I think we’re all sick to death of them. One thing I will say though is that I am convinced that cycling is leading the way in tackling doping – there are still too many sports that are in denial about having a problem. I’m proud that our sport is fighting this scourge and I do believe that we are seeing cleaner and fairer competition now than for many, many years. I don’t agree with those people who say that this battle is damaging our sport – it’s the people who’ve been involved in this cynical organised cheating who have done the damage, not those who are standing up against it.

Anyway, the meeting was held in the very futuristic setting of the Town Hall at Koksijde, host for the World Cyclo-Cross Championships and a regular on the World Cup circuit. Koksijde is an interesting place, one of Belgium’s leading coastal resorts, and here are three photos of the venue for those of you with an interest in the municipal architecture of the Low Countries (you may think that’s a small club to be a member of but, well, maybe you’d be surprised). 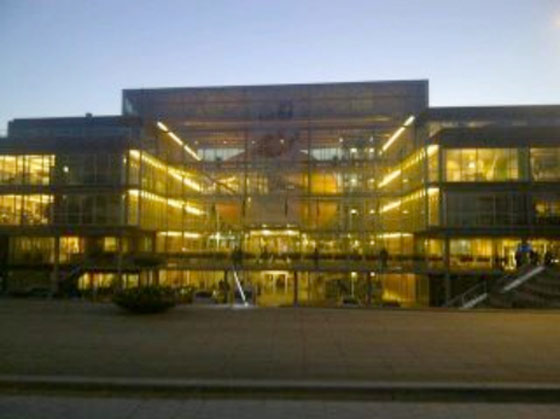 View from outside in the early evening – the globe like structure inside the building is the council chamber. Inside, the pod-like structure becomes clearer.

Back at home, I’ve been trying to get out on my bike a bit and have managed the odd couple of hours here and there. Last Saturday I was out in the Lancashire lanes and looked at my Garmin to find the temperature was minus 2.7 Centigrade. Fortunately I had plenty of layers so was warm enough, but I hurried back home as my feet got colder and colder – there seems to be nothing you can do, despite thermal socks and overshoes, eventually on a day like that, you get cold feet!

A much warmer, and more pleasant environment can be found at the Manchester Velodrome, aka the National Cycling Centre. So I’ve been trying to get there as often as I can for the Veterans’ SQT (Structured Quality Training) sessions. I really enjoy these, they give me a good workout, there are some hard efforts, but if you don’t feel up to it, you can take it a bit easier. Highly recommended, there are sessions for all levels of ability, plus taster and accreditation sessions for track novices too, but book in advance if you’re going to come to any session, as they are very popular and there is a limit on numbers on the track. And if you’re lucky, you get to see the national team riders warming up on turbos for their sessions!

Away from the bike, last week, I also managed to fit in a British Cycling Board meeting too, in which we focused on our forward strategy for the post London Olympics period and considered reports from our various commissions. Many of the items on the agenda will be covered elsewhere on the website as they reach an appropriate stage, so I won’t say any more at this stage. But we continue to make good progress in pushing the sport forwards, and I am pleased that we have an experienced, knowledgeable and supportive Board, comprised of people who really love and understand our sport. You can find their names on the website and contact any of them if you want to know more about their work.

That’s it for this week. Later I’m off to the fantastic new London Olympic Velodrome for the Track World Cup, at which I am also representing the UCI. My first duty is to present Jason Kenny with the World Sprint Championship Gold Medal and Rainbow Jersey, which have been awarded to him following the retrospective suspension of the Frenchman Gregory Bauge. I’m very pleased for Jason, but very unhappy that it has taken so long for this matter to reach a conclusion. However I’m sure Jason will take it in his stride and it will provide extra motivation for him as we head for those all-important London Olympic Games.

As ever, please let me know what you think about any of the subjects discussed above and let me know if you would like me to comment on any other matter.