Tom Pidcock’s early breakaway proved a shrewd move in Barnsley after cantering to victory in the penultimate round of the HSBC UK | National Circuit Series.

The Team Wiggins rider decided to go early in the race and it was decision that paid dividends – a one-handed wheelie over the line a perfect way to celebrate his dominance.

There was yet another podium spot for Matt Gibson, the JLT Condor rider taking second while a sprint finish was enough for Tobyn Horton to finish third ahead of Tom Stewart.

But the evening in South Yorkshire undoubtedly belonged to Pidcock, making the most of the technical course around the city centre.

Quick-pace race causes many a break

With the race lasting 47 minutes, there was no doubt that a quick pace would be set right from the off, and so it proved.

Breaks were therefore habitual with national criterium champion Gibson the first to try and force the initiative, with riders lapping at 1’33” in the early stages.

But as he was hauled back into the peloton, 15 riders stole the march at the front of the race before Madison Genesis’ Isaac Mundy found a gap – one he was determined to make the most of.

Indeed he was able to get his lead up to nine seconds before being joined by Jon Mould, eventually hauled back into a new front group of five.

"It's my last crit of the year so it was nice to finish with a win."@Tompid bounced back from Nationals in style as Barnsley became a family affair for the Pidcocks...#CircuitSeries pic.twitter.com/jC1ivjYlEC

Pidcock was among them as he looked to bounce back from disappointment at last week’s National Championships, attacking solo in the first major break that was allowed to stick.

Building a lead of six seconds, Stewart was hot on his heels before Team Wiggins swarmed onto the front of the chasing group in aid of their race leader.

As the race went on it seemed his advantage would become decisive, 22 seconds the count when Fred Wright began the latest attack to challenge his place at the front.

That in turn launched a chase featuring six riders as Pidcock’s lead started to decrease for the first time, though the windy nature of the course allowed him a lead that he may otherwise not have had.

With Gibson and Joey Walker, winning of Wednesday’s HSBC UK | National Circuit Series race in Sheffield, leading the chase however, victory was not a foregone conclusion.

But Pidcock showed exactly what he is about, duly extending the gap between him and those behind as the open road ahead of him drew closer to the finish line.

With five laps to go the lead was 45 seconds as the chasing pack returned to parity with each other – leaving the 18-year-old the honour of being cheered over the line.

He did so in some style too, a one-handed wheelie an opportunity for him to revel in the occasion after a long season on the road.

It’s Gibson who still leads the overall standings however on 126 points, 36 ahead of Horton who takes the mantle of second spot ahead of Walker, with Pidcock in sixth.

His Team Wiggins outfit are within striking distance of top spot in the team standings however, their tally of 253 points just four behind the tally of leaders JLT Condor. 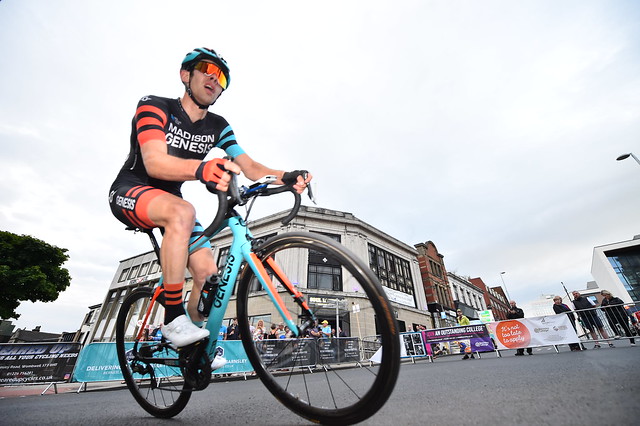