Rob Scott and Tom Pidcock dovetailed to impeccable effect to guide Team Wiggins to glory at the Skipton Grand Prix.

Scott made good on his early promise and crossed the line first in the third round of the HSBC UK | National Circuit Series, thanks in no small part to fellow teenager Pidcock, who offered superb support to complete a fine one-two for their team.

Team Wiggins moved to within two points of JLT Condor in the team standings – they saw Matthew Gibson finish third to keep himself top of the individual rankings.

As the action got under way in North Yorkshire, Great Britain international Chris Latham was one of the first riders to attempt to steal a march before Joe Holt (100% Me) and One Pro Cycling’s Jake Scott both chanced their arm, only to be reeled back in.

Two further breakaways threatened to flicker into life before Scott eventually escaped the pack to become the solo leader.

Matt Gibson and Fred Wright were two of the first to attempt to give chase before JLT Condor’s Ian Bibby and Tom Moses both went on the attack – but to no avail as Scott held his nerve.

The Team Wiggins man continued to bolster his lead, going on to enjoying a 17-second gap as Pidcock moved to the head of the chasing group.

Pidcock was on hand to offer support at the perfect time and left the chasing pack in his wake as he matched Scott’s pace, with One Pro’s Tom Baylis at the head of the peloton.

The Team Wiggins pair were in cruise control as the rest of the field struggled to keep up, with 100% Me’s Fred Wright and Holt, as well as JLT Condor men Moses and Gibson, among those attempting to manufacture some late drama.

In the final throes, Scott and Pidock see their cushion begin to ebb away but they dug deep and crossed the line virtually in tandem to complete a dominant showing, Gibson winning a sprint finish to take the final spot on the podium. 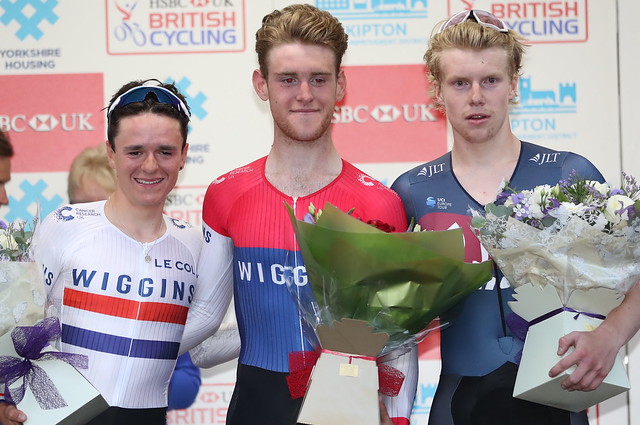