Teenager Tom Pidcock continued his remarkable rise to prominence by taking the HSBC UK | National Circuit Championships title as Katie Archibald made it a pair of maiden winners in Sheffield.

PH-MAS Oldfield/Paul Milnes Cycles ERT's Pidcock, just 17, won from the bunch with a huge uphill attack, matching that of Archibald just an hour earlier as the Team WNT rider distanced Elinor Barker to win gold from the leading pair.

Harry Tanfield and Jon Mould took silver and bronze in the men’s race, with Barker and Lucy Shaw occupying the final two podium spots in the women’s event.

After nearly 15 minutes of rapid riding a break of four got away thanks to Joey Walker’s attack, with Ed Clancy present for JLT Condor, Alex Paton for Madison Genesis and George Walker of Richardsons-Trek.
But with no representation from BIKE Channel Canyon and ONE Pro Cycling, they organised the front of the bunch to start the chase.

It took ten minutes but, eventually, the peloton – led by BIKE Channel Canyon’s Harry Tanfield – bridged the gap, if only briefly.

Almost as soon as the race came together JLT Condor’s Mould attacked uphill and was joined by Paton, with Tanfield making the pair into a leading trio.

And three soon became four as British, European and World under-18 cyclocross champion Pidcock attacked to join the head of the race in the blink of an eye.

But when Walker also came across the intensity was taken out of the break and the race was all back together.

A flurry of attacks, first from JLT Condor’s Matt Gibson, and then Pidcock again, formed a front group of six with two Madison Genesis riders, as well as representatives from BIKE Channel Canyon and ONE Pro Cycling.

After ten minutes of status quo it was Graham Briggs who flew off the front of the chasing pack, taking Matt Cronshaw with him, to make it two JLT Condor and three Madison Genesis riders in the front group of eight.

And the group continued to swell further as first Walker and Mould made the junction.

But the escapees soon slowed and allowed the bunch to re-join with four laps remaining.

JLT Condor and Madison Genesis drove the pace for the remainder of the race, hoping to set it up for either Briggs or Tobyn Horton in a bunch sprint, but Pidcock spoiled their party with a remarkable solo attack to add the National Circuit Championships title to his cyclocross and junior Paris-Roubaix victories.

Archibald looked the class of the field from the moment the flag went down, visible on the front and seemingly driving the pace for the benefit of teammate and defending champion Eileen Roe.

A six-strong chase group then formed, including two more Drops riders, and two from Team Ford Ecoboost, who swiftly joined up with the leaders to form a group of 13 at the head of the race.

Archibald was again ever-present at the front of the group but could not stop Durrell launching a solo attack, instead leaving it to Amy Gornall to close her down.

But when the Secret Training CC rider could not reel her in, Archibald took matters into her own hands and did the job herself.

Not content with chasing down breaks, the Team WNT rider then launched one of her own, with only team pursuit colleague Elinor Barker able to match her effort.

The formidable duo had too much for the rest of the race and, despite a strong effort from Lizzie Holden, stayed clear to the finish.

And it was Archibald that crossed the line first after launching a long attack up the cobbled hill, that Barker could not counter, to win her first HSBC UK | National Circuit Championship title – with Drops’ Shaw winning the sprint for third from the chasing pack.

"It's a really fantastic evening!" 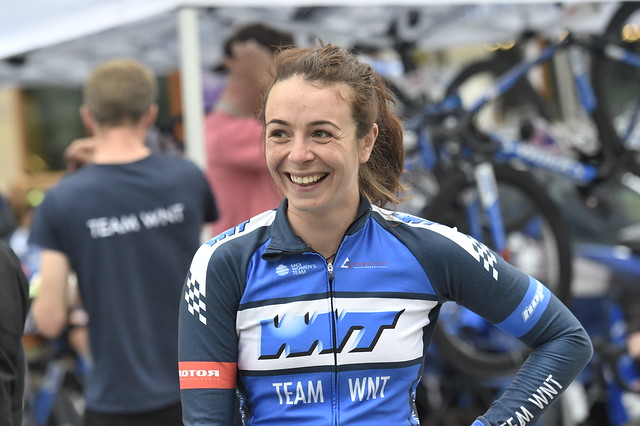