Katy Marchant excelled to win the sprint and claim her first ever national jersey at the British Cycling National Track Championships on Friday.

The former heptathlete affirmed 2015 as her breakthrough year with a superb victory at the National Cycling Centre, defeating defending champion Jess Varnish on her way to the title.

Becky James showed that her form was returning after an injury-hit 2014 by taking silver after losing 2-0 in the final to Marchant.

“It's pretty cool! It’s my first one so I'm pretty happy to come away with a gold medal in the sprint,” Marchant said.

“It's another step forward towards the world championships in London and then Rio, it's exciting.

“I felt good, I was really happy with qualifying and my legs were on my side and I felt really strong and I felt like I did myself justice.

“I'm having a good run at the minute and I don't want it to end, let's see what we can do!”

Matrix-Fitness’ Laura Trott collected the women’s individual pursuit title but only after an enthralling final against 2014 champion Katie Archibald.

The Pearl Izumi Sports International rider had qualified fastest and looked on course to defend her title in the final before Trott turned the contest on its head in the final five laps.

“I'm really happy. For me, the IP is sort of a mixed event, I didn't really know how well I was going to go. I was really happy with my time and to take the national title,” Trott said.

“I just went flat out so I was really happy that I managed to pull it back and in typical Laura form, leaving it until the last two laps.” 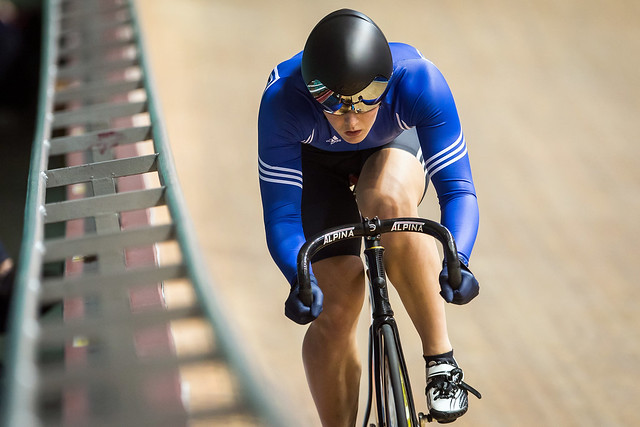 Tennant was in arrears at one stage in the final but showed his experience to turn the deficit around and finish in 4.23.583 with young Burton in 4.27.209.

It was a Team Wiggins double as Jon Dibben added bronze against Matt Gibson.

“It's fantastic, there was more pressure this year as the reigning champion, pressure that I'd put on myself more than anything,” Tennant said.

“I wanted to retain the title and I knew Germain would be one of the ones to beat. I had to use everything I had to try and beat him and it worked out on the day but I know it was close.”

Matt Crampton timed his attack perfectly in the men’s keirin final to take the British title convincingly ahead of Lewis Oliva and Thomas Rotherham in silver and bronze respectively.

Crampton surged around the final corner past Oliva with Jason Kenny boxed in.

“It means a lot,” Crampton said.

“It's really nice, I've had a tough year, a tough couple of years so it's really nice to step up today and put a bit of icing on top of the cake.

“The nationals are very competitive, there's lots of sprinters, lots of really high calibre races and every round you're very focused and you have to give it your best. It's a big year so it's nice to come here, have good legs and enjoy the races; the results come then.”

Kadeena Cox won the para-cycling C1-5 time trial with a stunning effort in her first ever British championships.

“It feels so good, I'm just over the moon to have won it,” Cox said.

“It wasn't the perfect ride, but I tried to just work as hard as I could all the way to the finish line. It's amazing. It's my first ever national title, you've got to be happy!”

Pilot Scott and stoker Thornhill, who won two world titles in Apeldoorn, completed the four laps with a factored time of 1:08.709.

“It means the world, it really does,” Thornhill said.

“This is what we work for every day. The national championships are our second biggest competition of the year and to come away with a win as well as wearing the world championship jerseys is brilliant.”