The penultimate round of the 2019 HSBC British Cycling National Youth Circuit Series saw the action move to a tight criterium circuit around the campus of Lancaster University.

The third and final stage of the N-Fuse North West Youth and Junior Tour saw Joe Kiely and Maddie Leech take victory as the Youth A events both ended in tight finishes.

The baking heat of the previous two days gave way to very welcome, overcast, dry and cool conditions for the riders as they negotiated high numbers of fast, frenzied laps around the one-mile circuit.

There was a breakneck start to the Youth A boys race laps saw a high octane charge around the course as the riders fought for the all-important position near the front of the pack.

The course’s two roundabouts, one ridden the ‘wrong” way round, had the effect of stringing the field out to the extent that riders at the back of the group were still in the lead bunch but almost a quarter of a lap down on the leaders.

GC leader Max Poole (Bike Box Allan) immediately eschewed any notion of sitting in and merely protecting his lead by taking the first prime bonus and adding a few seconds too it while, all the main contenders remained active towards the head of the race.

After 40 minutes of frenzied action the pack settled down for a bunch sort out which was taken in impressive style by Kiely, riding for Welwyn Wheelers.

“I haven’t felt like I’ve had much form recently,” he admitted.

“It’s great to get a win, I’ve got one more road race then it’s into the cross season.”

Leech nips in for win

The opening laps of the U16 Girls race saw all the leading riders near the front in a moderately paced game of cat & mouse.

The field seemingly worried more about what their rivals were doing rather than instigating any hard race efforts, casting nervous glances left and right to see what the competition was up to.

That all changed on lap ten with an explosive attack by Kinga Ingram (Halesowen A&CC) which initially dragged GC leader Millie Couzens (PH-Mas/Paul Milnes Cycles) away from the main bunch.

The peloton sensed the threat and closed it down quickly only to see Stage 1 winner Maddie Leech (RFDA) go straight over the top and open a gap of a couple of seconds.

The most impressive attempt at a solo win came with four laps to go when Bethany Barnett (Liv Awol) attacked a bunch that looked like it had settled for the sprint finish, gaining 11 seconds with just three to go.

She bravely stuck it out for a lap and a half and deservedly won the most aggressive rider award for her effort.

The pack refused to be denied though and chased her down with a lap to go and at the line Leech emerged out of the final bend to take her second stage victory of the weekend, with Couzens comfortably holding on to a big lead to take victory overall.

“It was a good course, with lots of bumps and stuff” explained Leech.

“You could carry good speed all the way around but you couldn’t get away as it was too easy to jump on somebody’s wheel."

The U14 girls was largely uneventful due to a massive GC time gap accrued by national champion Awen Roberts (Towy Riders) on day two.

Roberts was noticeably marking Izzy Sharp (Estrella Bikes), the only rider capable of soloing off the front and gaining a significant time gap, ensuring the race came down to a bunch sprint.

Carys Lloyd (VCL), winner of a previous national series race at Redbridge this season, took a fine win on the line in a tight finish.

She edged out Niamh Murphy (Cotswold Veldrijden) with Sharp in third, while Roberts comfortably retained the GC lead to take the overall victory.

“I just went into the race and thought I’d try my best and it worked” said Roberts.

“The TT was good, a bit windy for me but I powered through and finished 3rd and when it came to the hill my mentality was just to go for it really.”

The U14 boys blasted off the line in customary fashion, forcing the pace so hard in the early laps that a good 20 riders were distanced as early as lap 3.

The usual suspects were forcing it at the front with GC leader Oli Akers (Albion Cycling Co) and Ben Wiggins (TeamSB Hub) in constant close attention at the head of affairs.

Wiggins took three of the four primes on offer wins for valuable bonus seconds but nobody managed to convert a sprint into any kind of meaningful break.

Constant surges in pace saw a steady trickle of riders dropping off the back but the main peloton stayed largely intact around the GC contenders leading to the inevitable bunch kick that saw Quillan Donolly (Cycling Ireland) add to his prologue win with a fine second victory on stage three.

Akers finished safely in the bunch to wrap up the GC victory.

“My plan was just sit in the group, I didn’t have to do anything, so it was great” said Akers.

The final round of the 2019 HSBC British Cycling National Youth Circuit Series takes place at the Revolve 24 event at Brands Hatch motor racing circuit on 14th September where the series’ winners will be crowned. 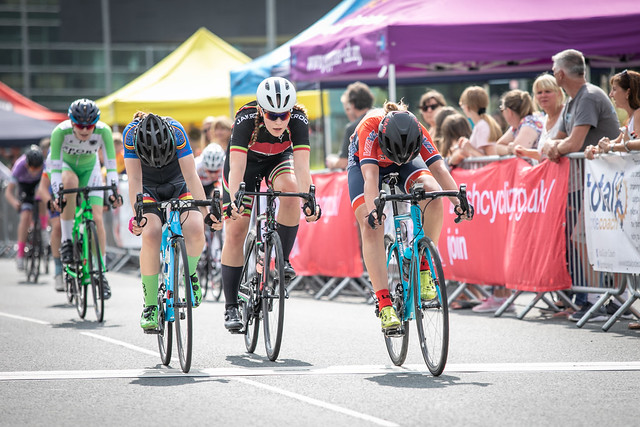