Zoe Backstedt twice broke the national record on her way to claiming the girls’ under-16 individual pursuit title at the 2019 National Youth and Junior Track Championships.

The two advanced to the final, and Backstedt once again produced something special, obliterating her own new national record to stop the clock at 2.21.963 and take gold. Couzens (PH-Mas-Paul Milnes) had to settle for silver, while Madelaine Leech (RFDA) took bronze.

Two titles were also awarded in the junior women’s age group, with both going to riders who have only recently transitioned to cycling.

Smith, who made the move from triathlon less than a year ago, rode intelligently to spring a surprise and claim the points race. She took the race on from the outset, gaining a lap on her competitors and winning two sprints on her way to winning the race by nine points from Eluned King (Liv CC-Halo Cycles). Anna Shackley (Team 22) was a further six points back and claimed bronze.

Stone, a former athlete, was victorious in the sprint event. She set the fastest time in qualifying, and progressed unbeaten through the rounds to set up a final with Serena Natt (DIMASCIO). Stone completed her faultless day by taking the title with a 2-0 win, while Rhian Edmunds (Newport Velo Y CC) was able to celebrate a second medal of the championships as she won bronze.

The boys’ scratch race was won by Charlton, who made his move with five laps to go and never looked back, claiming his first national title from Max Poole (Bike Box Alan) in second and Joshua Giddings (MI Racing Academy) in third.

Finlay Pickering (Vive Le Velo) was the first to attack – with ten laps remaining – but Charlton counter-attacked and passed Pickering in the process. The chasing bunch was slow to respond to Charlton’s attack, enabling him to stay out in front and gradually increase his lead before he eventually crossed the line comfortably clear.

Cooper was victorious in the junior men’s sprint, ensuring that Tom Sharples (Welwyn Wheelers) had to settle for a second silver of the championships. Cooper was in impressive form throughout the day, and had too much for Sharples in the final, winning in straight races. 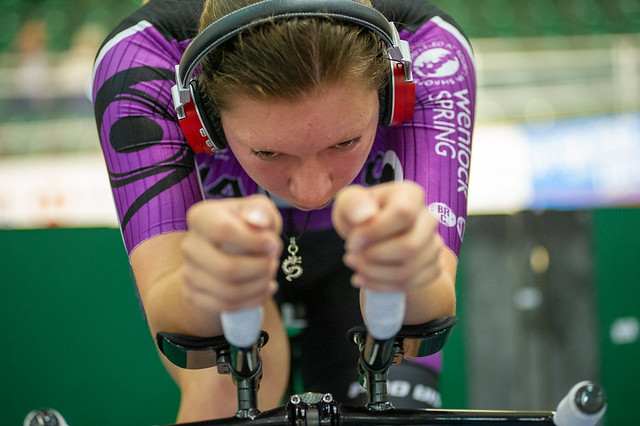