TV Coverage: Scheduled to be shown on Sunday 21 Aug, 13:00 on BBC Two in "Olympic Countdown"

Mark Cavendish (Great Britain) gave fans a tantalising glimpse of what might happen in 12 months time when, riding in GB colours, he win the won the Olympic Games test event with a typical sprint as the race finished on the Mall in London.

Given the perfect lead-out by his GB team-mates, Cavendish beat Sacha Modolo (Italy) and Samuel Dumoulin (France) to the line.

The race saw an early break of four, Kristian House (Rapha Condor - Sharp), Liam Holohan (Team Raleigh), Tom Murray (Sigma Sport - Specialized) and Cleberson Weber (Brazil). They were almost 3 inutes up as the race exited Richmond Park and that had grown to over six minutes at the 30 miles point.

The peloton, with the GB and England Teams prominent, ride up the Zig Zag road at Box Hill

At that point, the bunch began to react and the leaders' advantage gradually diminished. House was able to claim the points on the two ascents of Box Hill, but with Weber and then Murray dropping back it was inevitable that they would be swallowed up.

There was a little more drama on the run in to the finish as Heinrich Haussler and Luca Paolini tried to bridge across to House, who was by now the only one of the original break still surviving, but all three were pulled back and a bunch sprint became inevitable. A brief run off the front by Kurt-Asle Arvesen in the closing 5km didn't upset the GB team's plans and they brought him back just as efficiently as the HTC Columbia team have been policing breaks for Cavendish in the Tour de france in recent years.

With Tyler Farrar crashing in the closing stages and the Australian lead-out breaking up at the crucial point, it was left to Russell Downing and Jeremy Hunt to provide Cavendish with the launch pad for his sprint, which easily held off Sacha Modolo and Samuel Dumoulin.

After the race Cavendish tweeted "So what better result at the London Olympic Test Event than a win? With the strongest Great Britain Team performance I've ever been part of."

And then "Incredible to see the support of 1000's of people today! Even with the viewing restrictions on the course. Made me so proud! #rulebritannia" 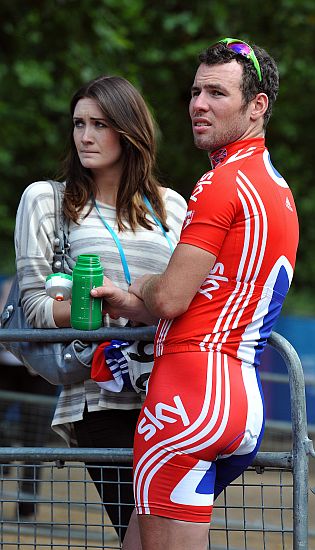 Mark Cavendish relaxes after the race with girlfriend Peta Todd

Although well short of the full distance of the Olympic race next year, it was a satisfying win for Cavendish who will have noted the dynamics of the course and, of course, the boost of being able to ride in front of a highly partisan crowd.