The sun came out today and cast its rays over the Trough of Bowland to create one of those days that are becoming all too rare – a beautiful warm summers day. The Cycling Development North West, Lune Racing Cycling Club event sponsored by Maxgear; was won last year by Dave Clarke (Pendragon Le Col Colnago) and with Neil Swithenbank (GS Surosa) who is leading the season long series, also riding, it was going to be attacking from the gun.

Team Raleigh had sent a full team to the north Lancashire hilly course which circum-navigates the Duke of Westminster’s Abbeystead estate over tough lonely roads and was able to mark every move made. Within the first lap, Swithenbank and Dan Fleeman, (Team Raleigh) soon made an early attack and with the chasing peloton never letting them too far out of sight, they eventually caught them with Dave Clark doing the lion’s share of the work. 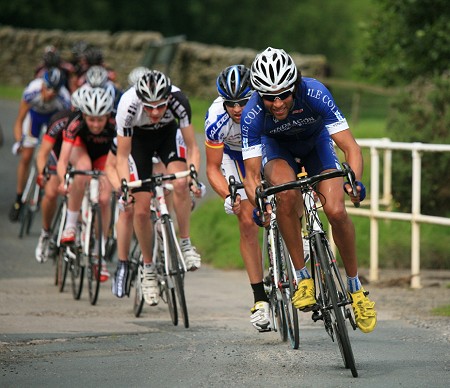 Eventually a group of four riders managed to eek out a usable lead. Andy Guy, (Science in Sport.com), Andrew Hawdon (Team Herbalife/Wheelbase.co.uk), Liam Holohan (Team Raleigh) and Grahame Sumner (Great Britain Fire Service. The four worked well together and ascended Cow’s Mouth; a short, steep and difficult climb, in style, but with Clarke, Swithenbank and Matt Cronshaw (Rapha Condor Sharp) missing the break there was a lot of fire power in the group to chase them down. The peloton came within 8” of the group when an attack came from within it and again saw a group go clear.

Anyone would have been forgiven for placing a bet on the winner coming from within this group of Guy, Hawdon, Sumner, Holohan, David McGowan (Kouta/GSG/Spinergy), Paul Woodrow (Team Aspire), Andy Coupe (Team Wallis CHH), Tom Barras (Team Raleigh) but Dave Clarke had other plans having missed the move. He worked tirelessly to bring the group back with little contribution from others, though later lamented on the unwillingness of others to go with him when he attacked.

On the main climb, Team Raleigh made sure they were in the next big move. Tom Barras gained 30” alongside Swithenbank but over the fell road, Clarke, assisted by Cronshaw and Tom Last (Sigma Sport Specialized) chased hard and eventually the leaders were caught at the bottom of Cow’s Mouth. Team Raleigh’s strength in numbers played dividends today and each time a break was caught, they were able to fire another rider to the fore. This time Richard Handley set sail with team mate Holohan and again, riding a great race; Grahame Sumner.

They opened up a gap of 1’15” but when Holohan confided in his team mate that he was not feeling too strong, Handley set off on his own for the long one with Sumner happy to just follow in his wheels. 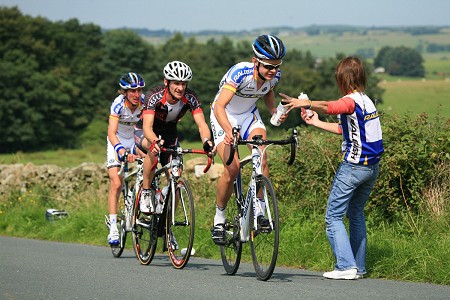 Meanwhile in the peloton, Cronshaw and Clarke were driving hard. Cronshaw attacked alongside Barras and the pace remained high as they closed in on the lead riders. At the finish line though, it was Richard Handley who came in with one hand raised in victory and clearly the winner, but the finish for second place was still open. With the long straight finishing hill laid out below, spectators were able to see Sumner some way ahead of a chasing peloton. It was anyone’s guess whether he would hold on to the line.

Sumner looked around sensing the danger and tried to put in a final effort only to be failed by his cramping legs. Tom Last must have seen this and put in another final acceleration. With Sumner zigzagging across the road, Last had to come around Sumner to take second place. 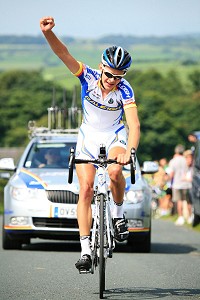