Lewis Askey added the Junior Tour of Wales to his collection after claiming top spot in the GC on a sweltering final day’s racing in the Blaenau Gwent mountains.

Isaac Peatfield took the final stage, but in his final race in the UK at Junior level before stepping up to under 23’s, Askey (Backstedt Cycling) claimed the crown with an intelligent ride in the searing heat in Monmouthshire.

Starting the day with only a seven-second lead over nearest rival George Mills‐Keeling (Cycle Club Bridgnorth RWG), Askey used his experience to conserve energy when he could and never lost sight of Mills‐Keeling, staying close to his wheel the whole race and eventually crossing the line on the same time to keep hold of the coveted yellow jersey.

After topping the podium, Askey described his feelings: “It was a hard, stressful race, but one that was well worth it in the end.”

Stage Five proved another aggressive, fractious race and not short of incident and controversy. The start of the race was held up almost straight from the off after a crash in the de-neutralised zone that saw one rider with his bike broken in two!

The racing resumed after a few minutes and immediately the attacks started, with a sprint prime 4km into the race and with bonus points available attacks were inevitable.

Racing calmed slightly after the explosive start as riders settled, attacks continued and breaks got away but were soon pulled back in as threats were stubbed out quickly.

The race started to change shape as it neared the stunning Tintern Abbey near the halfway point, as a break of 12 rode off the front and began opening up a gap on the peloton containing the yellow jersey.

The gap increased to over one minute as the leaders went over the top of the second KoM climb when, with around 40km to go, Alfie George crashed near the front, subsequently taking down five others with him.

Picking themselves back up and re-joining the peloton the six proceeded to help chase down the six leaders out front, closing the gap to 23 seconds as the race approached Raglan Castle.

By the time Watson reached the bottom of the Tumble he’d been joined by Peatfield (Green Jersey RT) Logan Maclean (Spokes Racing Team) and William Foster (Cyclesense) and now had a 20-second gap on eight chasing riders and a further 50 seconds on the peloton.

Foster was dropped early in the ascent as the other three pressed on to the summit. Peatfield made his move halfway up the Tumble, dropping Watson and Maclean and powering to the line to take the stage by 21 seconds. 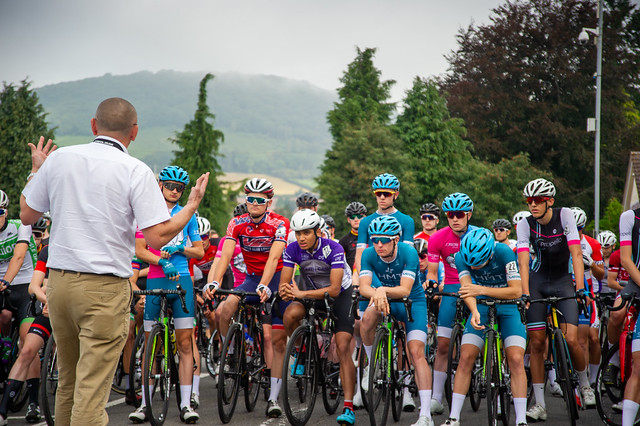