Bounded by the London mainline railway, the M1 motorway and the Grand Union Canal, the busy town of Watford is a transport nexus.

For cyclists too, the town is well served with transport infrastructure; long distance cycle paths and a comprehensive network of on-street and traffic-free cycle lanes; enabling bike commuters from the outlying districts to commute into Watford’s cycle-friendly High Street. 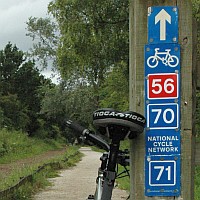 National Cycle Network Route 6 passes across the southern fringe of the town centre. NCN6 is a long distance route which begins in London and ends in the Lake District. Locally however, NCN6 is known as the Ebury Way, a 3.5 mile former railway line which links Watford and Rickmansworth. As well as providing a safe, traffic-free way for cyclists commuting into town, the Ebury Way is a well established ‘green corridor’ leisure route, crossing the Colne, Chess and Gade rivers, as well as the Grand Union Canal, with plenty to see along the way.

The canal towpath itself is another long distance cycling trail, joining the town to the west at Cassiobury Park, which itself has a number of traffic-free paths enabling cyclists heading in from the west to reach the edge of the town centre avoiding major roads.

These national and regional level routes are complemented by a spoke-like system of on road cycle lanes that converge on Watford’s cycle friendly High Street, which features contra-flow cycle lanes, on road and off-road paths. 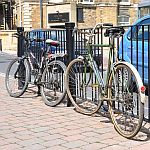 As mentioned above there’s good cycle parking provision at all three of Watford’s railway stations. In terms of taking bikes on trains, cyclists should refer to the cycle carriage restrictions of individual rail operators, details of which can be found via this link.

Watford town centre is well served with bike shops, with The Bike Stall in the Harlequin Shopping Centre, Halfords on Dalton Way (close to the Ebury Way), while Neale and Sons and Cyclopedia are both on Cassio Road.

Watford Town Council’s excellent Watford Cycle Map, detailing on and off road cycle lanes and cycle parking locations throughout the Watford area. Also check out their maps for the Ebury Way and The Grand Union Canal.