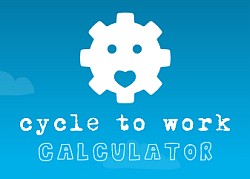 London cycle commuter Steve Morgan has built a great online app that makes it easy to calculate the money you'd save by switching from your car/public transport commute to bike commuting.

The app, found at www.cycletoworkcalculator.com also estimates calories burned and that most important saving - time, to highlight just three of the joyous benefits of riding to work.

We tested out the calculator with the following set of figures, randomly selecting a member of British Cycling staff who has recently converted to commuting by bike.

Based on these figures, British Cycling's 'Commuter X' would save £2.17 per day (or £565 per year). Their bike would pay for itself in less than four months, they would rack up 2607 miles in a year, burning an average of 500 calories a day. Most impressive of all, they would save a full two days of their precious life every year! What would you do with a extra two free days?

Check out how much you could save by firing your numbers into the Cycle to Work Calculator now.