Zoe Backstedt and Joshua Giddings were the big winners as the British Cycling Youth Circuit Series rolled into Minehead on a thrilling day of racing.

The pair both prevailed in their Youth A categories, with Backstedt producing a scintillating performance to strengthen her push towards the top of the standings.

Elsewhere, Isabel Sharp and Alex Franks also had reason to celebrate after emerging victorious in the Youth B equivalent races.

All eyes now turn to Lancaster in August where there is all to play for in the penultimate event of the series.

Backstedt (Storey Racing) destroyed a high-quality field with a show of total domination.

Leading from start to finish, Backstedt was unrelenting, eventually lapping all but two of the other 34 riders in a field that contained most of Britain’s top under-16 girls.

Backstedt showed her intent from the whistle, attacking straightaway, but her first few attempts to get away were reeled in quickly as the rest of the field tried to hang on to her wheel.

But with three laps gone, Backstedt had had enough and put the hammer down, lapping the 1.1km circuit in the 1:40s and averaging over 39km/h.

Backstedt rode away from the chasing pack, lapping rider after rider and eventually catching the main chasing group with three laps still to go.

Kinga Ingram (Halesowen A & CC) and Grace Lister (Wolverhampton Wheelers) tried in vain to chase down Backstedt but had to settle for second and third places on the podium with Ingram outsprinting Lister to take second spot over one minute behind Backstedt.

Giddings finishes the day in style

Giddings (The MI Racing Academy) closed a thrilling day’s racing in the late evening sunshine by coming out on top after a bunch sprint finish in front of the crowds.

The race started like crazy with Finlay Pickering (Vive Le Velo) the fire starter, constantly attacking and setting the pace in the early stages, decimating the bunch and spreading the field right out.

The bunch eventually came back together at the halfway stage as the frenetic pace eased and the leading groups were reeled in.

The group stayed together to the closing stages with Giddings powering over the line ahead of Max Poole (Bike Box Alan) in second and Owen Lightfoot (Bourne Whls CC) in third with no more than a couple of seconds between the top 20 finishers.

Sharp times it to perfection

Isabel Sharp (Estrella Bikes) left it to the final few metres of the race to pip Libby Bell (Leicester Forest CC) on the line after a thrilling two-up sprint down in the first race of the day.

The race started cautiously in the warm afternoon heat as riders got to grips with the fast one-kilometre circuit around Blenheim Gardens.

Efforts to break away from the group proved fruitless as the riders bunched together for the majority of the hour-long race.

It was Bell who seized the opportunity with one lap to go, sensing victory she made a decisive break as the bunch passed the start/finish line and climbed to the sharp hairpin turn.

Surprised by the aggressive attack, Sharp gave chase knowing she had less than 800 metres in which to reel Bell in. With Carys Lloyd (Lee Valley Youth Cycling Club), the pair set off in pursuit of Bell.

The race came down to a sprint-off between the two with Sharp just having the edge, making her move right at the line, with Lloyd taking third place on the podium.

Alex Franks (Hillingdon Slipstreamers) seized the moment, notching up his first ever win in a National Series race after a three-man cat and mouse battle.

It was again a cautious and slow start to the race. There were several small attacks as riders tried to feel the bunch out, moves were soon chased down and it looked like the result would come from a bunch finish after an hour's racing.

The trio increased the pace and started putting clear daylight between themselves and the bunch.

As the laps passed and the gap increased it was clear these three would be in a sprint-off for the podium places.

The lead chopped and changed as the three riders took turns on the front and as they entered The Avenue for the final time there was nothing between them.

Franks admitted after the race that he couldn’t work as hard as Smithson and Tarling and was hoping to be in the mix at the end. The ploy worked as Franks outsprinted Smithson to take the win. 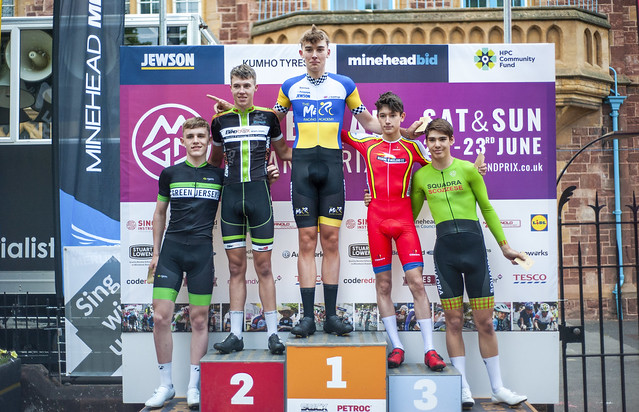