Alice Barnes stormed to victory in the Women’s Grand Prix, leading a 123 for Drops Cycling in round three of the British Cycling Women’s Road Series.

The 20-year-old crossed the line alone after splitting off the front of an eight-rider break which had been clear for around half of the race.

The first of eight climbs up the steep, cobbled Michaelgate split the race in two, with the front group powering on and being strung out by the pace.

An attempt to break clear by Jo Tindley (Team WNT) and junior Rhona Callender (Team Jadan) was allowed to get ten seconds as they hurtled round the second circuit, but the alert bunch soon reeled them back in.

Tindley attacked again on the fourth lap, and gained up to 40 seconds before her ten minute spell alone came to an end.

But she was determined, and after a breather back in the front group she attacked again - this time with Drops CT rider Rebecca Durrell for company - and they quickly got 25 seconds over the group. 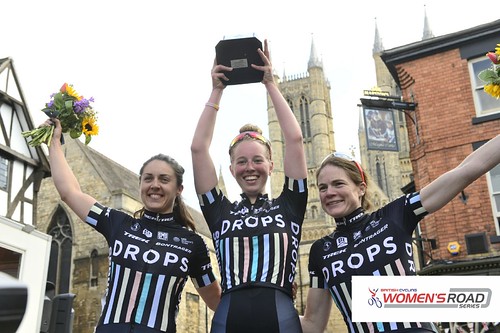 Durrell managed to stay with them, but Tindley dropped back to the bunch leaving four riders out in front with around 11 seconds over the bunch as they began the penultimate lap.

Drops CT received a boost when Laura Massey bridged across, making it three Drops riders in the break of five, but the bunch were hot on their wheels.

Charlotte Alston (Team 22) was next to attack off the front of the bunch, and quickly caught them to swell the group to six. But with the bunch just 75 metres back, it looked all over for this break. However, the bunch took their foot off the gas and the gap went back out to 22 seconds.

With three riders in the break, Drops Cycling Team were pressing on with Massey, Durrell and Barnes trying to get away, but the rest of the break were clinging grimly to their wheels.

As they headed round the final lap, the gap grew to 44 seconds, and it became obvious that the winner would come from this group.

As they started the Michaelgate climb for the last time Juniper fell away, and Drops Cycling dominated the climb, with Barnes pulling away to cross the line alone, and her team-mates Durrell and Massey taking second and third, six seconds back.

And to add to a great day for Drops Cycling, Ellie Dickinson was eighth and crowned the National Junior Road Race Champion (see separate report).