MTB ace Barnes, 20 and from Stockport, showed her prowess on the road by making the decisive break of 12, and then sprinted away from Juniper in the final few metres to take the stage win.

Coupled with her result from Saturday’s first stage, 34-year-old Juniper from Brentwood in Essex had done enough to take the overall and make a great start to defending her title in the British Cycling Women’s Road Series.

The first attack of the day came from Jo Tindley (Team WNT), initially with team-mate Hannah Walker for company, but she soon dropped back as Tindley found the legs to open up an impressive lead.

Charline Joiner (Ford Ecoboost) tried to catch her, but couldn’t, and the lead went up to around a minute and a half by the time they embarked on lap two.

After a couple of laps of freedom for Tindley the chasing started, with Charlotte Broughton (Ford Ecoboost) among the first to go after the leader.

She was joined by Delia Beddis (Les Filles RT) and Keira McVitty (Team WNT), and then Chanel Mason (Army CU) and Lydia Boylan (Team WNT) dug in and chased. 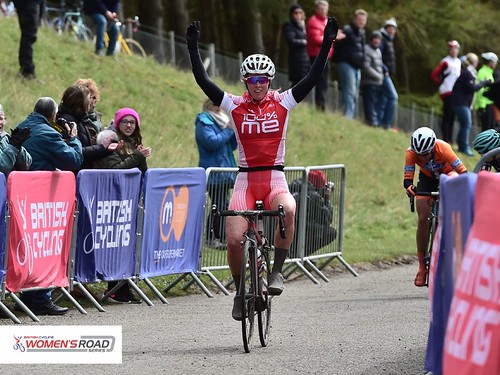 The gap started to come down as they started lap three, with a six-strong chase group having formed and got well organised, with Boylan, Mason and Joiner being joined by Eleanor Dickinson (Drops Cycling), Henrietta Colborne (Ford Ecoboost), Jennifer Hudson (Fusion) also up there and working to pull Tindley back.

The WNT rider was eventually reeled in, and with the bunch all together lap three rolled around with riders catching their breath and wondering where the next action would come from.

After almost a lap together, a break of nine riders attacked and were clear for ten minutes. As they were swept up, Julie Erskine (Ford Ecoboost) attacked, and quickly got around 30 seconds lead.

Alice Cobb (AJCHVA-LIMOUX) attacked and tried her down as did Anna Turvey (Ford Ecoboost) and Maddi Campbell (Team Footon Velosport), and another 12 chasers were pushing hard not to miss this break.

Campbell pushed on as she bid for solo glory and gained 20 seconds, but she was pulled back to the group of 12 leaders with 12 kilometres to go.

With five kilometres remaining the bunch had dropped back to around two minutes, and the winner looked set to come from the leading 12 riders.

As the line fast approached, Alice Barnes attacked and held on to cross the line around ten metres ahead of Juniper, while Lucy Shaw (Drops Cycling Team) took third.

“I didn’t have a proper plan going into the race really. I wasn’t really going for the GC, just a stage win,” said stage two winner Alice Barnes.

“I didn’t feel amazing, but I got better through the race as my legs came round.

"Each time up the climb I was testing how I felt. Every lap there was a group that got away and it would come back together, except on the last lap when we got a big gap and got away.

“Once we’d got the gap we worked well and I kept testing myself with little kicks, but saved it for the last lap. I didn’t go into the race thinking I would go for the climbs and the Queen of the Mountains, but the first time through I was third, so for the second climb I went for it.”

“I’m so happy!” said overall winner Nikki Juniper. “Coming into today I knew it was a big tough field so I wasn’t sure how it would go, but the girls in the team was amazing. Coming second to Alice Barnes who is a class rider, then get the overall I got really emotional on the podium!

“We wanted to control the break and not go too early and keep it together until the last lap. WNT sent someone up the road at the start and they had such a strong ride.

“Charline [Joiner] was keeping me calm early on, then said I needed to go on the last climb so try and start a break. I went, knowing that if my legs were hurting, so were everyone elses.

“We got a group of 12 together but there were some good sprinters in there and I’m not an out-and-out sprinter, but I knew the climb well. I knew it flattened out with 50 metres to go, so I just had to hang in there."

Grace Garner (Podium Ambition-Club La Santa) battled through freezing conditions to take victory in stage one of the Women’s Alexandra Tour of the Reservoir in Northumberland, round two of the British Cycling Women’s Road Series.

The 18-year-old from Leicester was riding with just one team-mate in the race, and against most of the top women’s teams in the country. But she timed her sprint finish to perfection, holding off Team Breeze rival Melissa Lowther, while Charline Joiner (Ford Ecoboost) was third.

The start of the race was delayed by an hour and the distance shortened after snow and ice left the course treacherous, but it thawed enough for the 81 starters to embark on ten laps of a small circuit to the east of the reservoir.

With how my legs felt, didn't expect that! But happy to finish off a cold day with a good bunch kick https://t.co/HWSuyeJk1D

A group of four escaped the bunch on the second lap, while at the other end of the bunch the high pace meant the bunch was being whittled down with riders dropping out of the back. 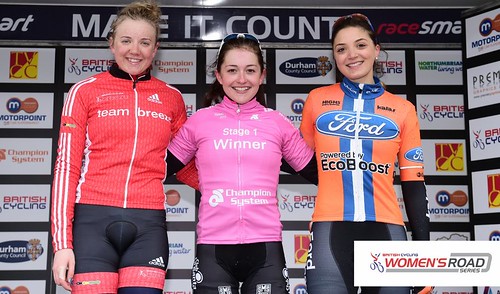 Team WNT were active in the early break with Lydia Boylan driving it along well, but the early break didn’t stick and with seven laps remaining it was all back together.

Team Ford Ecoboost and Drops Cycling Team gathered towards the front and upped the pace as they completed lap five, and the increase in speed saw the bunch shrink further.

As they went through the line with four laps to go splits were appearing in the bunch. Eleanor Dickinson (Drops Cycling Development Team) looked impressive as she pushed hard during her turn on the front, but Julia Erskine (Team Ford Ecoboost) dropped back with a mechanical and faced a hard battle to get back on.

As the bell sounded the strong few waited for the finish, but in the sprint it was Garner who edged to victory ahead of Lowther and Joiner.

Among Garner’s previous results are sixth in the women’s Tour de Yorkshire last year and seventh in the World Road Championships in America.

Stage one winner Grace Garner said: “I was just on my own as my team-mate was caught behind in a few crashes, and there were quite a few lead-out trains, so I was just dotting in and out of them. From there it was a drag race to the line. I kicked again with about 20 metres to go and I think I won it by about 15 centimetres.

“I knew if it was a sprint I would have a good chance because I’ve got a good kick. I’ve had a heavy week of training and my legs were sore, but to come here and give it a good shot. The delay helped, it was safer than it would’ve been. There was no ice left by the time we got going, but it was a tough wind out there.”