Banks (Storey Racing) led at the top of the individual standings by 11 points ahead of the day’s racing in Ryedale, with Mel Lowther (Breeze) second and Massey third.

But Lowther’s absence from the race, due to international commitments, paved the way for Massey to move up a place, and it was an opportunity she wasn’t going to let escape.

Despite Steph Mottram leading with a solo breakaway for much of the race, she was reeled back in with 6km to go, allowing Massey to set up the ideal finish.

Alice Sharpe (NCC-Kuota) crossed the line in second behind her, with Banks third – enough to see her crowned overall champion atop the overall individual standings.

61 riders started the race in Ryedale, with Banks leading off from the front as soon as the action got underway.

The bunch stayed together for much of the opening stages, remaining as one into the first climb of the day,before starting to separate as the ascent loomed.

The lead at the front of the peloton swung back and forth between Cycle Team OnForm and Storey Racing, the latter keen to protect their star performer.

Nothing separated the bunch as they returned to the start/finish line at Ampleforth Abbey and College, the first lap done and dusted with nothing much to shout home about.

But that soon changed as Mottram made her breakaway, quickly opening up a 40-second advantage over the rest of the field.

Rolling into Ouston, she extended the gap to 46 seconds, but it proved no cause for concern for the bunch still relatively early in the race.

Yet despite the gap narrowing slightly, Mottram went further ahead with an injection of remarkable pace, her lead at 1’32” as the halfway stage approached in Yorkshire.

And as the riders rolled into the three smaller laps of the race, the peloton started to break up as they set about the big climb of the day.

With around 25 riders remaining in the bunch, Chanel Mason (Storey Racing) launched an attack from the front, her teammates blocking from behind.

Mason, who sat fourth in the individual standings at the start of the racing in Ryedale, was soon reeled in by the peloton though, proving little danger to Mottram out in front.

But her lengthy lead didn’t last much longer as the peloton mounted their pursuit, her advantage steadily reduced down to 19 seconds as the bell signalling the final lap was sounded.

It looked as though the end of her attack was fast approaching, but Mottram had other ideas, soon extending it back to 33 seconds as the race wheeled past Ampleforth Abbey.

It had to finish at some point though, and it did with 6km to go, Mottram eventually caught by the advancing peloton.

Little could separate the bunch as the race prepared for the sprint finish, an uphill climb over the last 100m to deal with.

Storey Racing continued to lead in big numbers at the front, with Massey hot on their wheel just behind.

Just a 100m uphill stood between the riders and the finish line, and it was Massey who came through in the end, timing her sprint well to cross ahead of Sharpe and Banks. 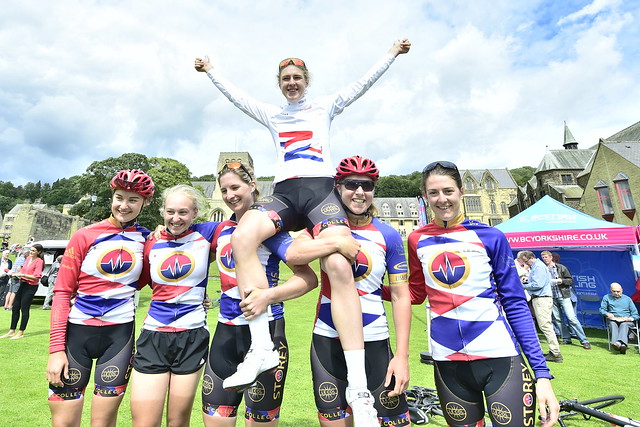