Round 2 of theCyprus Sunshine Cup took place this weekend, with the stage one Time Trial in Afxentia. It was the Czech mountain bikers that dominated the 5.6km time trial with Jaroslav Kulhavy and Tereza Hurikova taking the leaders jerseys in Elite Men and Elite Women.

Lee Williams came in 71st on the Time Trial course, which despite the sunshine was more slippery and wet than the riders had experienced on their training rounds. Lee was up 40 seconds on his time for 2011 at the Afxentia time trial.  There were a lot of riders putting in a great effort going a lot faster than last year, all vying for points and Olympic qualification.

Lee on the descent at the Time Trial course

At stage 2 on Saturady Lee Williams improved his position finishing 41st . He was the first British rider across the line at the 44.5km stage in the Macheras forest, ahead of Oli Beckinsale, Steven James, Ben Summer and Liam Killeen, who suffered problems with his tyres. Lee moved up to 45th in general classification at the end of stage 2.

The final stage at Afxentia on Sunday was the XCO course, with a start lap of 4km on forest roads before entering the 5.6km course. Lee came in 35th, ahead of Oli Beckingsale and Steven James  and improved his general classification to 35th. Liam Killeen was the highest placed Brit, coming across the line 10th.

Lee Williams talks to Welsh Cycling about the Cyprus Sunshine Cup, after completing Round One in Voroklini on the weekend. He finished Sunday’s race 31st, in a field of over 80 elite riders from around the world. The Cyprus Sunshine Cup is seen by many as the opening to the season, and with 2012 being an Olympic year there were many esteemed riders taking to the start line.

"It’s always exciting being back here in Cyprus. Over the last few years I've opened my mountain bike season with the Sunshine Cup, so it's slowly becoming a tradition and with it being a very well attended event, it’s a great way to test your early season legs. Physically, I feel good. I've had a great block of training leading into the start of this season and when I settled into the race I had good legs and was passing riders right up to the finish line.”

The rider field at Voroklini on Sunday

Lee tackled the course at Voroklini on Sunday, but suffered a puncture and a crash along the way.

“There were a few too many unfortunates during the race, but putting all that aside I think the performance was there and I ran a very controlled race without loosing my head. In saying this it was a stronger field than in previous seasons, with most riders thinking of Olympic selections, so to simply better my number board, (currently 44), would have been a fair result.  I do feel despite the mechanicals, I have got the physical ability to get a far better result than I actually ended up getting. Luckily I have Round 2 in a few days to make all things better!”

The next round of the Cyprus Sunshine Cup takes place this weekend. The Afxentia Stage race takes place around the Macheras Forest. The stage alone has been a UCI race for the past 16 years, making it one of the oldest existing stage races in Europe. Lee has been looking ahead to the weekend.

“Going into Round One my aim was to achieve a top 20 result. To finish in the top 20 by the end of the three days will still continue to be the plan, but also put me among some very big names on the mountain bike scene and would be a very solid start to the season.”

Round Two of the Cyprus Sunshine Cup, the Afxentia stage race, starts Friday 24th February with a Time Trial along a 5.6km course. Check back here for results over the weekend.

Voroklini - Round One of the Cyprus Sunshine Cup 2012

Wales’ Lee Williams finished 31st in the event, out of a field of over 80 Elite Male riders. This allowed him to move up to 44th on the grid. Welsh Cycling Mountain Bike coach Scott Bugden was at the course with Lee today, “Lee suffered a puncture and a crash on the course, but recovered from both and rode well. The result wasn’t quite what he deserved but he felt strong. We are looking forward to Round 2 starting on Friday.”

Lee WIlliams at the start of Round 1 in Voroklini, Cyprus

The Elite Men completed five laps of the 6km course in Voroklini. Britain’s Liam Killeen finished in 3rd place, behind Kulhavy and Fabian Giger. It was Kulhavy’s first ever win in Voroklini with a tight finish between himself, Killeen and Giger.

The second round of the Cyprus Sunshine Cup moves to the Macheras Forest on Friday for the Afxentia stage race.

Full results of Round 1 available here

The 2012 Cyprus Sunshine Cup kicks off today, with the first round in Voroklini. Welsh Cross Country and Cyclo Cross Champion, Lee Williams, will be representing Wales on Mediterranean island. He will be amongst good company with some of the worlds best riders competing from 24 different nations, including 2011 World Cup and World Championship gold medallist Jaoslav Kulhavy who will start his season in Cyprus.

Welsh Cycling Mountan Bike Coach, Scott Bugden, has travelled with Lee to the Sunshine Cup where they have been preparing for the first round in Voroklini, “Preparation has been good for Sunday’s race, although for an event called the Sunshine Cup there hasn’t been much sunshine! Lee has completed a few steady rides, taking in the Cypriote mountains and is currently feeling good about the race. We are expecting some typical sticky mud on the course, and if that is the case the race will be hard on both the bikes and the riders.” 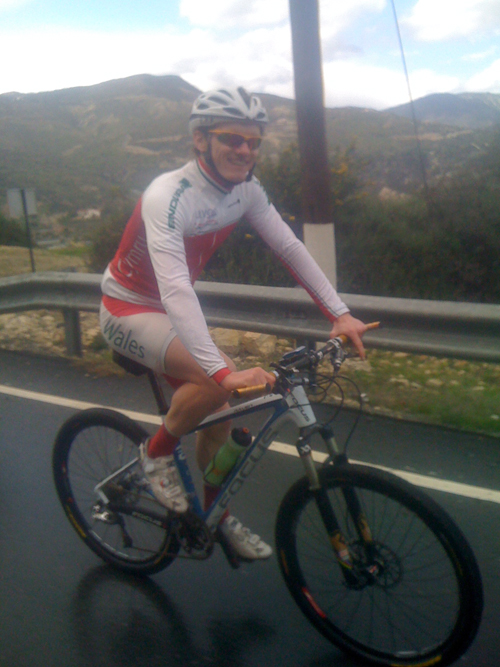 Lee WIlliams on a training ride in Cyprus

The course at Voroklini is described as being mainly on forest road with some technical sections. The terrain is mostly hard clay, but this could cause problems if wet and becomes sticky and there are also some rocky parts for the riders to tackle. Lee has had a practice day at the course in preparation for today’s race.

“The course is dry and not too technical. The forecast for the race is warmer than it has been and less windy, so conditions should be pretty good. It is very similar to last year, and Lee is happy with the course and we are both looking forward to the race. The final start list shows a very good field, but we are aiming for a top 20 finish.”

Check back here to find out the results from Round One of the Cyprus Sunshine Cup 2012.