I am very excited to report that I got my first European UCI C1 podium place on Friday in Nommay, France.

My racing has been going very well recently and I have been feeling strong in my races, which has given me great confidence and having the legs to back this up is a great sensation!

On Thursday morning we departed for Nommay.  A 600km 6 hour drive. It actually went by quick with the company of my team mate Craig Richey and Danish rider Margriet Kloppenburg and of course the TFGG- ‘The Famous Gregg Germer’!! We arrived at the provided race hotel at 4.30 which meant I was able to get a good turbo spin in to loosen my legs up after the long journey. It was slightly eventful as I managed to fall and hurt myself in the hotel room...typical Gabby moment really!

The course was pretty much as I expected, lots of power grass sections, steep banks, and steps. It was fast. Warming up my legs felt pretty sore and not particularly responsive; but as Gregg pointed out whenever I say that I normally have a really great race....and that is what happened!

I got a great start and led to the first corner, continued to ride hard and was riding in third with Hanka in sight. I worked my way up to Hanka after 1 lap and then battled it out with her all the way to the line. I finished 3rd 5 seconds behind Hanka. I felt very happy, I had felt great, really strong and powerful. I had been happy to sit on the front as I was able to set my own pace and choose my own lines.

I was very excited to finally win some flowers! I won lots of goodies and a big trophy. I was very happy to put in a great performance not only for myself but also for all the people and sponsors that support me and believe in me. A big thankyou to Gregg and Renner Custom CX Team.

It's taken some adjusting to racing in the US, but this week, I have had some better success. I have finally had that proper race sensation, where I feel like I am actually on it and everything flows well. It was a great feeling after my previous races where I felt pretty average at times! 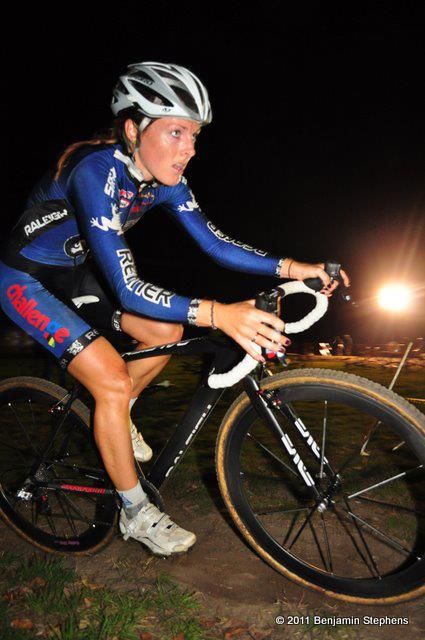 I have been having a really great time in the US and as time to leave comes closer I am finding myself wanting to stay. I have found the whole cyclocross scene here so much more relaxing and less stressful, simply because everyone is so friendly. It's been a perfect start to my season. I have met some amazing people and it has been so much fun travelling together as a big group to the races - it makes the whole race weekend so much fun!

Last weekend was another double weekend of racing. Saturday's race was in Burlington, Vermont, which was a very beautiful place. On the Friday, a group of us pre-rode the circuit (it was a 'ride with the pro's') with some of the local school children. The course was quite dry and fast with some nice turns, so I was excited about racing the next day.

However, with some heavy rain overnight, the course turned into a complete mudfest. So it was going to be purely about power and not crashing! I got a great start and was riding comfortably in second and third position until I had some issues . I think mud tires may have been good, but at least only having Grifo tires makes my decision before each race rather easy, as I can be quite indecisive at times! Unfortunately, I slipped into sixth position after a few slips and slides and felt rather discouraged on my last lap . I guess I let my head decide how I should ride!

After a quick wash and repacking of the car, Jeremy, Shaun, Molly (The Girl With The Cowbell Tattoo), Donny (from the Newly Elite column) and myself took off towards Rochester, New York . a long drive but we broke it up by stopping at a hotel after four hours. I have to admit that I was not particularly keen on racing the next day. Saturday's race had been so hard and intense and my bikes were still suffering the effects too! But after racing Rochester and having a pretty good race finishing fourth, I was very happy that I rode. Considering how I felt before the race, I was pleased.
My housemates also rode great too, so it was a pretty good weekend.

Last night was the Midnight Ride Cyclocross race in Lancaster, Massachusetts. It was to be my first ever night time cyclocross race, so I was excited. My race started at 7 p.m. and the guys race was at 8 p.m., so it was very late (and dark) racing. I pre-rode the course with Jeremy and we loved it. It was a fun course with lots of cool corners that you could ride nice and fast. Anyway, I finished second, but was so close to first. After the first lap, I led the race right up until the final part of the last lap.
And then, I ended up sprinting for the win with Helen Wyman . my head wanted it, but my legs just couldn't quite make it! I was so happy with how I raced, my legs felt great and everything just flowed nicely. I rode the corners fast and smoothly and most importantly had fun. Thanks to all the support on the course!

I now have less than a week before I fly back home but before then I have the Gloucester GP, which I am told is a pretty big deal! So I hope I continue to ride above average from now on .