Ian Bibby recorded his second victory of the HSBC UK | Spring Cup Series in a pulsating finale to the Lincoln Grand Prix as Rory Townsend was crowned overall champion.

JLT Condor man Bibby, who won the Chorley Grand Prix last month, emerged from the peloton in the final stages of the race to cross the line ahead of Townsend (Bike Channel Canyon) and Matthew Holmes (Madison Genesis).

A seven-strong pack had dominated for much of the race, accelerating away from the peloton after just one lap.

They later extended their lead to over three minutes, before two riders fell away and the chasing group caught up.

Bibby’s JLT Condor teammate Steve Lampier did mount a late solo attack, but was soon reeled in, allowing the peloton to hurl towards the finish line before Bibby emerged to take first place.

It wasn’t enough for him to take the overall crown though, as Bike Channel Canyon rider Townsend’s second-place finish in Lincoln secured him the top prize.

After seconds, thirds and disappointments before at Lincoln, there was no mistake for @IanBibby86 this time around! #SpringCup pic.twitter.com/sQ1hukgRng

With one lap complete under the bright skies of Lincoln, nine riders broke clear of the peloton in the early stages of the race.

Seven of those were soon to up the pace, establishing a 43-second advantage over the peloton with the remaining two riders ten seconds back.

It was a race with special significance for Walker, with his father, Chris, winning the Lincoln Grand Prix 23 years ago.

With less than eight laps to go, the leading seven extended their advantage further to more than three minutes, battling through wet conditions as a brief shower passed through.

The peloton soon kicked on, however, reducing the gap as Stedman fell behind on the climb to turn seven leaders into six.

With Madison Genesis taking over the front, the peloton kick-started their chase and soon narrowed the deficit to 1.48 minutes with just five laps to go.

But just one lap later, the leading group fell to just three riders, with Lampier, Evans and Williams continuing to keep up the pace at the front.

The Team Wiggins riders were soon back in contention though, joining back up with the leaders for a five-pronged attack for the line.

There were just over two laps to go when sole chaser James Lowsley-Williams (Bike Channel Canyon) caught up with the leading pack, reaching Michaelgate with the peloton just 22 seconds behind.

Lampier sensed an opportunity, though, and mounted a lone attack on the top of the climb to lead by 14 seconds.

He was soon caught however, as the race became one again in the lead up to the final lap of the picturesque Lincoln course.

Seven riders soon broke away to power towards the line, with Johnny McEvoy (Madison Genesis) leading the attack, but it was Bibby who emerged victorious as he crossed the line ahead of Townsend and Holmes. 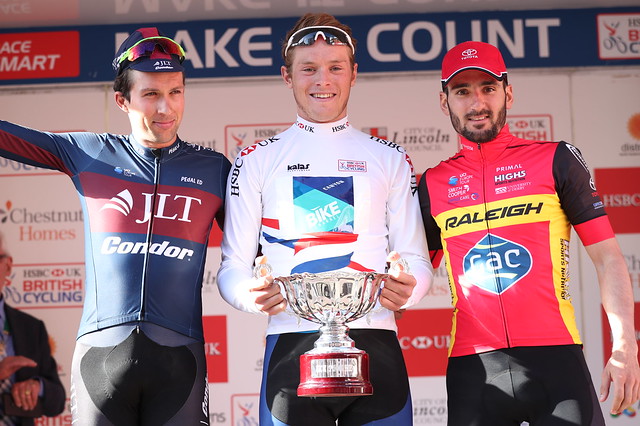