Gavin's role as Surrey Ambassador at the Olympics has inspired him to squeeze in another ride.

So the World's largest Sports Day is underway - and (briefly) my attention turns from Sportives to duties as an Olympic "Surrey Ambassador". The main focus of an Ambassador is to welcome people to the area - direct them to points of interest and enrich the experience of spectators visiting the area for an Olympic event. The Olympic event in my case, was the Men's and Women's Road Race on the opening week-end. For this duty - an Ambassador shirt was issued. Not my choice of colours - but then again - if you squint and refocus and semi-close your eyes - it can look like a Giro leader's jersey. 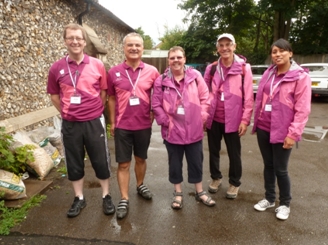 Above: Ray, Me, Rosie, Tony and Katherine - Surrey Ambassadors

Along with my team I was stationed at Leatherhead - less than three minutes from the Box Hill exit for an Olympic cyclist, five minutes by car and ten minutes for the rest of us mortals.

Two big screens were erected in the town enabling crowds to follow the race - and the standard fayre of face-painting, bouncy castles and entertainment was laid on to keep the cycling mad crowds amused. The atmosphere was fantastic - and even four hours before the race was due to pass through - people were keenly lining the streets. There were picnics, singing, comedy sideburns , morris dancers and the support was vociferous and passionate, everyone desperate to catch a fleeting glimpse of their heroes. As the race went through the final throws of the Box Hill loop the anticipation built.

As I took time to ponder a cheese sandwich during a rare break in front of the big screen - I was delighted to see these elite competitors cycling on roads familiar to me. There they were, peddling up Staples Lane - the first climb in the SWRC Long Legged sportive back in May, skirting Ranmore - scene of the Wiggle Ups and Downs and so often a gateway to the rolling hills of the North Downs. Then on to Box Hill, my route home from the many training rides I have put in this year. Watching these heroes speed up the familiar zig zags - my connection with this sport once again felt strong. How many enthusiastic amateurs get to kick a ball on the hallowed turf of a legendary stadia such as St James' Park, or wheel an over at The Oval? Yet on the screen in front of me - the riders were on lanes I ride on, passing my favourite cake stop at Cycles Dauphin - lemon drizzle a recommendation. Unlike me though - they didn't stop for a coffee, cake and a breather in front of Eurosport.

On the Sunday, the women's road race was extremely well supported - and despite the torrential conditions and thunderstorms - the crowds turned out, remaining to watch the outcome on the big screens - cheering as Lizzie Armitstead opened GB's medal account.

Happily - the disappointment of Saturday was eased with a Silver on Sunday - and a Gold on Wednesday. The Champion of the moment fresh from his bell-boy duties at the opening ceremony - turned in a ferocious performance destroying the TT field. GB bagging a bronze too - there has never been a better time to be a cycling fan. Certainly - among the crowds of people beaming happily in the rain - it seemed that this could no longer be described as a sport on the peripherals of public recognition.

It is with tremendous exitement that I received an invite to the Ride with Brad Sportive - courtesy of British Cycling. This Sportive celebrates the launch of the Bradley Wiggins foundation - aimed at supporting young people's participation in sport and providing equipment and facilities to support this end. Given Bradley Wiggins outstanding recent achievements - this will undoubtedly prove to be a flourishing charity making a big impact in achieving it's objectives.

This 160KM Ride is a step out of my comfort zone and I have been warned that the hills of the North West will provide a stern test for any southern softies used to gentle rolling hills. This will be my first ever UK Sportive outside the South East and I am absolutely thrilled at the opportunity of participating - I wouldn't miss it for all the Rafa in the World. So thrilled in fact - that I shall be relocating my annual family holiday from Dorset to the North West for a few days - prompting my wife to amend her Twitter Bio to "Cycling Widow".

Mancunian friends have warned me of the tough Lancastrian welcome that lies in wait. They tell me that in the summer the temperature is arctic - the sun sets at mid-day and climbs are far less welcoming than the softie leafy hillocks we have down south. Nasty Nick O'Pendle and friends are tough lads - and require a little more work than a few laps of RIchmond Park clad in the latest Rapha summer wear! With this in mind - I have booked myself in to the Compact 50 Sportive this Sunday. It's been nearly a month since the Etape and any serious riding - my weight has gone up but with all the cycling I have been watching. I do feel inspired. So to Sunday and beyond - and the chance to emulate the great deeds of the last few weeks.