Barney Brown blogs his experiences at April's White Horse Challenge sportive in Wiltshire, riding the event with friends as preparation for the 2012 Etape du Tour. 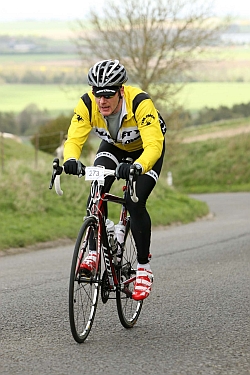 On its event website, this sportif is described as "...a useful early season ride that will enable riders to gauge their fitness as they cycle 90 miles through Wiltshire, Berkshire and Oxfordshire with about 1400 metres of climbing." It also takes in four of those familiar white horses carved into chalk hills across Britain, hence the event name.

Sounds perfect. Four of us are doing the Etape this year, and we all managed to get the day off work / family commitments to test our early-season form. I had managed to maintain some training through winter (including hill intervals – a first for me and a show of commitment!), had some good miles in the legs and felt confident.

What could go wrong? Well, this had been the wettest April on record so who knows what we’d face. I had also decided to use this ride to try out a brand new saddle and new shorts - brave, I argued, as all my friends laughed at me. (As a precaution, I was also trying out Assos chamois cream for the first time as well – a pleasing minty tang, I discovered!)

Spirits were high in the car to the event. We made good time and found the last parking space on the high street - things were going well. We unloaded our bikes whilst taking in the assorted cycling exotica, agonised over "overshoes or not" (not), and headed off to registration.

We collected route maps and located the four horses. (It was then that I remembered there had been four horsemen of the apocalypse, each with their own horse.) At this point one of our party announced that he was not himself after eating a "dodgy kebab" two nights previously. Kebabs – the fuel of champions! I made a mental note not to ride behind him and we set off.

The first three hills / horses went by without incident - we made steady progress and were feeling good. It was then that somebody mentioned there was an extra hill at a lovely village called Ramsbury (without a horse). Turns out this was the hardest hill of the day where a number of riders were reduced to walking (or stretching out cramp). By chance I found myself next to an Australian hardman with calves sculpted from granite; I hauled myself after him, convinced he was hurting as much as me. He wasn’t, as he edged away from me at the top.

So, onto the last horse at 82 miles, where the organisers had set up a King of the Mountains time trial. It was probably no more than 0.75 miles long, and crossing the timing mat at the bottom I gave it everything. A drag up the hill led you to the event photographer doing a splendid job of capturing your face contorted with pain, sweat and tears (see photo). Cresting the top, it was then a head-down final charge to the finish and the prospect of sweet tea.

This is a great event which I’ll return to next year. It was well-signed / marshalled, had lots of “cyclist food” at the feed stations, and with a 10-minute massage for £5 what could possibly go wrong? Nothing really, as it turns out. Even the new saddle didn’t put up a fight!

NB: Our sportive bloggers competition is now closed and winners will be announced soon. Stay tuned!