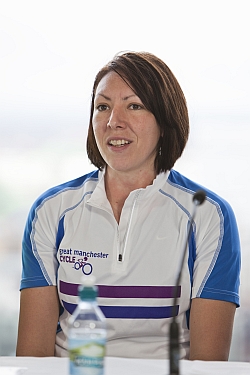 Rebecca Romero, the current Olympic Champion in cycling’s 3k individual pursuit, has hailed the introduction of the Great Manchester Cycle event as a major boost for the sport at the launch of the event today.

Featuring a 13 mile lap starting at Eastlands and going past Old Trafford, the event, which has the full endorsement of governing body British Cycling, will feature three different distances, designed to cater for all abilities from club cyclists to families who wish to take in the sights of the city on a gentle cycle together. The lap will include a unique chance to cycle on the Mancunian Way; the inner city ring road normally being closed to cyclists.

Ian Drake, Chief Executive of British Cycling said: "The Great Manchester cycle is an exciting project that will provide a great focus for people getting into cycling up in the North West. With distances to suit a wide range of abilities this is a logical next step for anyone who's been inspired to cycle more whether through initiatives like Sky Ride or the exploits of our Team GB stars around the globe"

Romero, the only British woman to win medals in two Olympic Games in different sports has announced that she intends to take part in the event. She said, “I will definitely be there and I’m looking forward to being there at the start of another great sporting initiative for Manchester. Of course I have happy memories of becoming world champion here back in 2008.”

Councillor Mike Amesbury, executive member for culture and leisure, said, “The Great Manchester Cycle is a unique chance for everyone, regardless of ability, to get on their bikes and enjoy riding through the city on roads free of traffic.

“The 2012 Olympics will see a national focus on sport that will help inspire everyone to get more active. Manchester is hosting a selection of mass participation events throughout the year providing as many people as possible with the chance to take part.

“The Great Manchester cycle has categories designed for cyclists of all abilities so there’s no reason not to hop on your bike and enjoy the city from a different perspective.”

Blood cancer charity Leukaemia & Lymphoma Research, are supporting the Great Manchester Cycle. Every 20 minutes someone in the UK is diagnosed with a blood cancer such as leukaemia, lymphoma and myeloma. Survival from childhood leukaemia is now more than 90%. But survival for adults is on average just 50%. And treatments for all ages are still harsh. Cathy Gilman, Chief Executive of Leukaemia & Lymphoma Research says: "It's great to see Manchester hosting this major cycling event and we are excited to be part of it. We hope people will support us at the Great Manchester Cycle and be part of our team that won't stop until we've beaten blood cancer."

Entries for the Great Manchester Cycle are now open at www.greatcycle.org and will be accepted on a first come, first served basis.